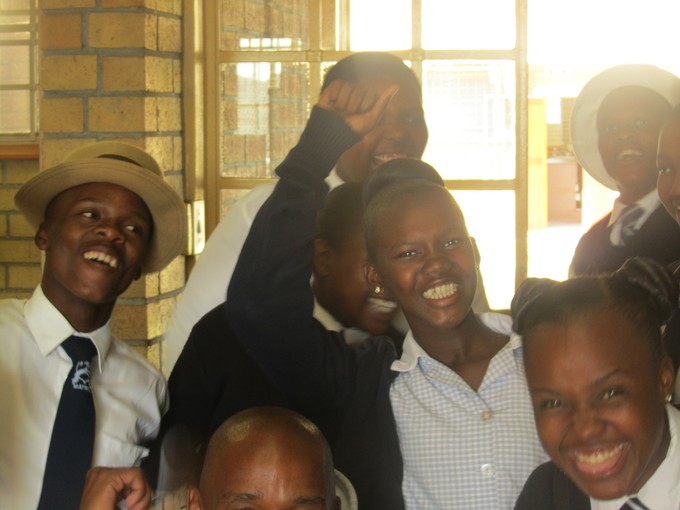 Nicholas Sebolai (left), Emihle Joni (with her hand up) and Andisiwe Nohashe (far right) and their friends celebrate the appointment of a maths and science teacher at their school. Photo: Bernard Chiguvare

It was all smiles today when grade 10 to 12 learners at Khulani High School in Langa were officially told that a maths and physical science teacher had been appointed.

The teacher started teaching at the school yesterday.

This was after students marched to the Western Cape Department of Education District offices in Koeberg last week demanding a teacher. Students said they had not had a competent maths and science teacher since last year.

The students marched again on Tuesday 12 April and according to an official from the district education office they broke windows and stole food.

“When students have grievances, they should not vandalise property,” he said.

The official said the teacher would be employed until the end of the year and a plan would be made for next year.

“Now that we have the teacher we hope to work hard to achieve better results. We hope there is no more trouble with these subjects. ” said Emihle Joni, a grade 11 learner.

Tumelo Xhanko from Equal Education said: “We are very happy about the development. We had to sweat for this outcome. This is expected to improve the learner’s performance by the end of the year.”

“We are sure this will put our plans back on track,” said Bonakele Busika, the school principal. I hope with the addition of this educator we will be able to recover the lost time.”

In a short meeting held today at the school, three district education officers, four learners, two representatives of Equal Education and the school principal, agreed that the catch up programme that had been put in place should continue. The school expects a 50% pass rate in maths and 70% in physical science this year.