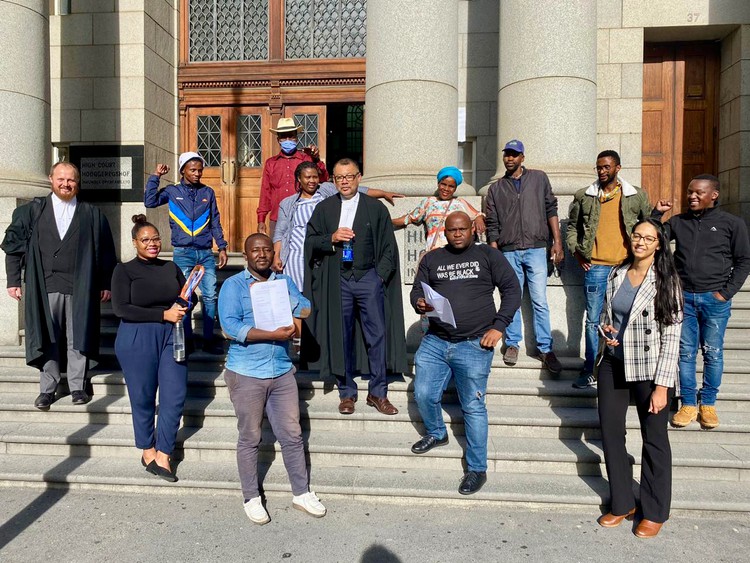 Empolweni residents, legal representatives, and community activists from Khayelitsha CAN outside the Western Cape High Court which ruled that residents whose shacks were demolished can return to the land. Photo: Zacharia Mashele

Residents of Empolweni informal settlement whose homes were demolished by the City of Cape Town have won a victory in the Western Cape High Court against the City on Friday. The matter was heard on the urgent roll and was twice delayed by the City.

Judge Bryan Hack ruled that the City must allow 130 people to return to Empolweni and must give back the residents their building materials. Where material has been damaged, the City is to ensure that there is sufficient material for all 49 homes to be rebuilt.

The relief relates only to the urgent matters of restoration of materials and permission to return to the land. The matter will be heard in full after the Covid-19 lockdown has ended.

The order is contingent on no more people moving to the site. The Empolweni community has agreed to prevent further erection of structures on the site. If they are unable to prevent further building, they are to report this to the City through their attorneys at the Legal Resources Centre.

Civil society organisations – the Social Justice Coalition and Ndifuna Ukwazi – have agreed to assist the residents with the implementation of the order.

Outside court, Buhle Neo, speaking for the Khayelitsha Community Action Network (CAN) which has been supporting the residents of Empolweni, said that he accepted the ruling, and that his primary concern, that people are housed, has been met.

The residents of Empolweni were represented by Advocates Ismail Jamie and Michael Bishop, and their attorneys were Khensani Motileni and Anneline Turpin of the Legal Resources Centre.

A statement by the City said that it was entitled to protect its land. “[The judge] has made an interim ruling on humanitarian grounds and without considering the merits of the application,” said the City. “The City is allowed to remove any new illegally erected structures with immediate effect. Land invasions are illegal. The Judge acknowledged this aspect and emphatically denounced land grabs.”

The City also published photographic evidence showing that the land occupations took place after the lockdown began, although this was acknowledged by the land occupiers to GroundUp from the onset.

UPDATE: This article was updated after publication with the City’s comment.