Thousands of people need toilets, taps and electricity in Khayelitsha 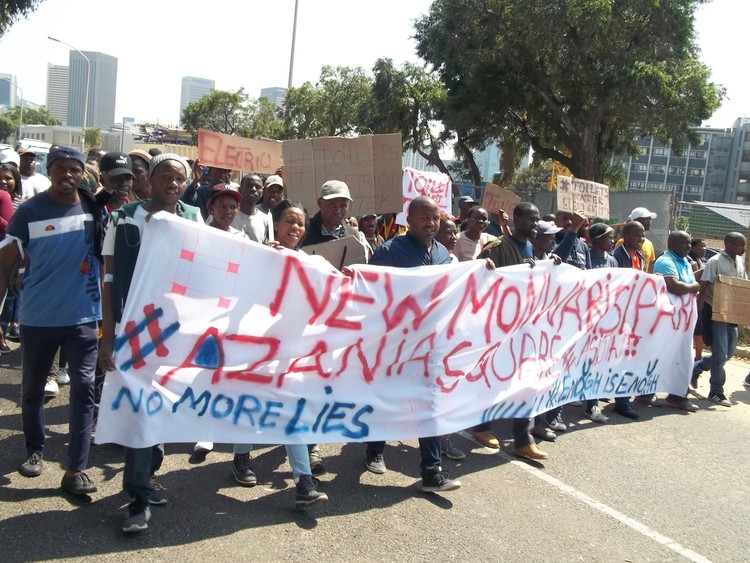 About 100 shack dwellers marched to the Civic Centre in Cape Town on Tuesday to demand that the City provide basic services in New Monwabisi Park, Khayelitsha. Photo: Vincent Lali

About 100 shack dwellers marched to the Civic Centre in Cape Town on Tuesday to demand that the City of Cape Town provide basic services in New Monwabisi Park, Khayelitsha.

“We want services that the City should have given us shortly after June last year, when we occupied the land. The right to basic services is enshrined in our Constitution, but the City violates it,” he said.

Mnqayi said that without sanitation women and children had to relieve themselves in the bush, where they were “easy prey for thugs who rob them”. He said that without electricity people used candles and shack fires had already broken out three times.

Community leader Zimasa Mandla said that the City had installed about 20 taps in New Monwabisi Park, but there were now thousands of shack dwellers. Women still had to walk long distances to fetch water. She said they needed about 400 additional taps.

Mandla read out a memorandum of demands. Councillors Xanthea Limberg and Anda Ntsodo received the memo.

Mandla said the City had dragged the shack dwellers to court for occupying land which had been “vacant for decades.” She said the City had “tried every technique and excuse in the law book to evict us from that land, even though they do not have a relocation plan or site”.

Mandla said City law enforcement officials continued to tear down shacks and used “racist language while destroying our homes”. A complaint against the officials had been laid with the Human Rights Commission.

The protesters gave the City seven working days to respond to their demands.

Limberg said the City is committed to providing basic services in the informal settlement and to working with its leaders.

“We will meet at the negotiating table and deal with your demands,” said Ntsodo.