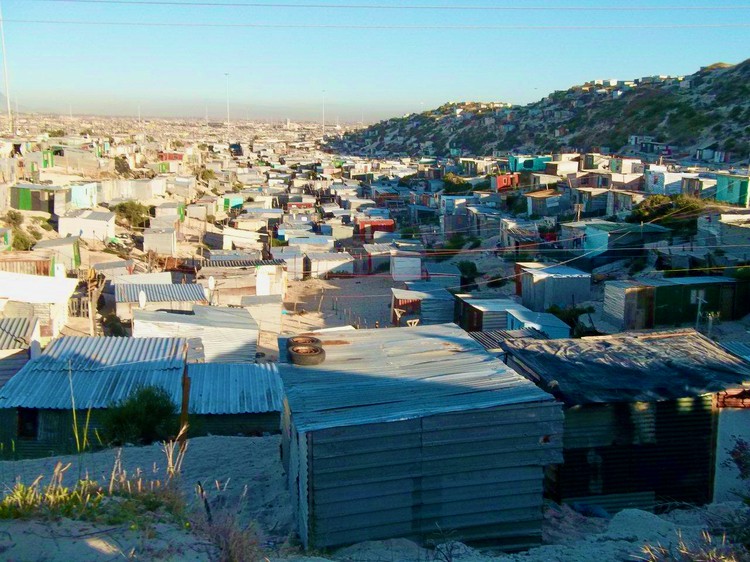 Shack dwellers from Vosho informal settlement in Khayelitsha burned tyres and tree branches on Baden Powell Drive on Monday, demanding that they be relocated to serviced sites. Photo: Vincent Lali

Shack dwellers from Vosho informal settlement in Khayelitsha burned tyres and tree branches on Baden Powell Drive on Monday, demanding that they be relocated to serviced sites.

“Because the road is important for the economy of the province, we block it to force the City of Cape Town to listen to us,” said community leader Luthando Matiwane.

When GroundUp arrived, protesters were hiding from police among the shacks.

Matiwane said Mayco Member for Human Settlements Malusi Booi had promised to relocate the shack dwellers to serviced sites in 2019 and to prepare the Vosho land for RDP housing.

He said protesters wanted Booi to explain why this was not happening.

Booi, however, responding to GroundUp, said the land belonged to the City and had been illegally occupied. “The provision of services on this land was not planned and is therefore not included in the City’s current budget or resource allocation,” said Booi.

“There is no agreement in place with the community … Numerous newly established communities are demanding services but currently the City is unable to cater for these unplanned settlements as existing, recognised informal settlements are prioritised on the basis of available resources, which are not limitless.”

Meanwhile, the Vosho shack dwellers have already elected a steering committee to oversee the relocation.

“We also want to leave [here] so that the housing development can happen, but we are angry that the relocation is not happening,” said Matiwane.

Vosho started in February 2018 and grew rapidly. There are now 1,400 shacks. They have no services, not even garbage collection.

The shacks are built on a hill, jokingly called Plattekloof. Matiwane said sometimes the wind blew shacks over onto the shacks below.

The shack dwellers also have to cross busy Baden Powell Drive to “squat in the bushes” across the road to relieve themselves.

Community leader Thozamile Finini said that Stuart Pringle, chairperson of sub-council 24, had said they would be relocated this month.

“At a community meeting held at Kuyasa Library in January this year, he said we must use nearby water taps and toilets while the City was still busy preparing a land for us,” he said.

Pringle confirmed the meeting but denied making promises. “I would never give such as undertaking because it’s not in my power,” he said. “I just indicated that I would ask the Department of Human Settlements to engage with them.”