Province says that it has allocated money for security; condemns protest during school hours 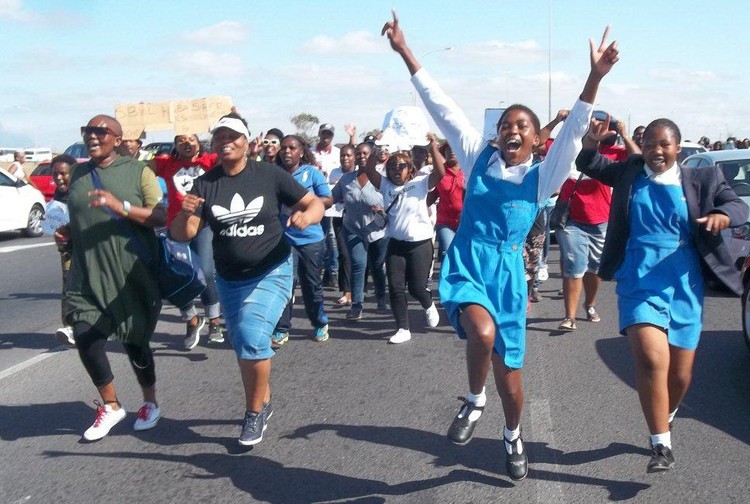 Hundreds of residents, teachers and learners marched to the Khayelitsha Magistrates’ Court on Thursday. They handed over a memorandum demanding measures to make their schools safer.

The protest, organised by the Khayelitsha Education Forum (KEF), called for the Western Cape Education Department to install metal detectors in all schools and to hire security guards 365 days a year.

KEF also called for the department to start a Walking Bus, in which learners, under the supervision of an adult, walk in groups to and from school. The protesters called for proper fencing too.

Nowawethu Mosana, chairperson of KEF, said, “We have been asking the department to deploy guards to all the schools in Khayelitsha, but we have not yet received the guards.”

Mosana said teachers feel vulnerable while they teach learners as no one guards their schools. “Criminals disrupt learning and tuition and rob teachers of their belongings at gunpoint in broad daylight, leaving them traumatised,” she said.

The KEF held the protest on the same day as the State of the Nation Address to draw the government’s attention to the school safety crisis. Mosana said: “All the ministers are here in Cape Town today, so we hope the protest will attract their attention.”

She said residents were angry at the courts for letting off “school robbers” and giving them bail.

“The residents provide police with information regarding school burglaries and robberies in addition to CCTV footage received from schools and they arrest the thugs,” said Mosana, “but the courts don’t convict them.”

The schools don’t get updates from the police on the cases they open, she said.

Thokozani Ngcayiyana, secretary of the Khayelitsha School Governing Body Forum, said, “The department is giving schools laptops and tablets, but who is going to secure them?”

“The government said it will deploy law enforcement to our schools, but they are confined to Table View and white schools,” he said.

Stanley Makhubela, principal of Lwandle Primary, said he tried to close holes in his school fence, but criminals still enter his school. “Our schools gets burgled and teachers get robbed of their cell phones and laptops at gunpoint at least four times a week because we don’t have guards at all,” he said.

“We report the robberies to the police, but they don’t make arrests. We just receive messages saying the cases have been closed but no explanation as to why,” he said.

Nozuko Mdingi, a member of Khayelitsha SANCO, said residents must stop buying stolen school property. “The government must deploy soldiers to all schools in Khayelitsha because the criminals are too dangerous for us,” she said.

Court Manager Velile Yayi received the memo. “I can assure KEF that they can come to us with cases that are not progressing, and we will give them feedback,” he said.

Western Cape Education Department spokesperson Kerry Mauchline said that the department has allocated extra funding to schools in the area for security. “This included an amount of R1 million for schools to install alarms, security gate motors, cameras and the like.”

“Schools had to present a proposal in order to receive the funds. Almost all of the proposals arrived three months late,” she said. “Preventing learners from attending school is never an acceptable way to resolve these challenges, and we condemn this in the strongest of terms.”