More than 130,000 learners have relocated to the Western Cape over past five years, according to provincial education department 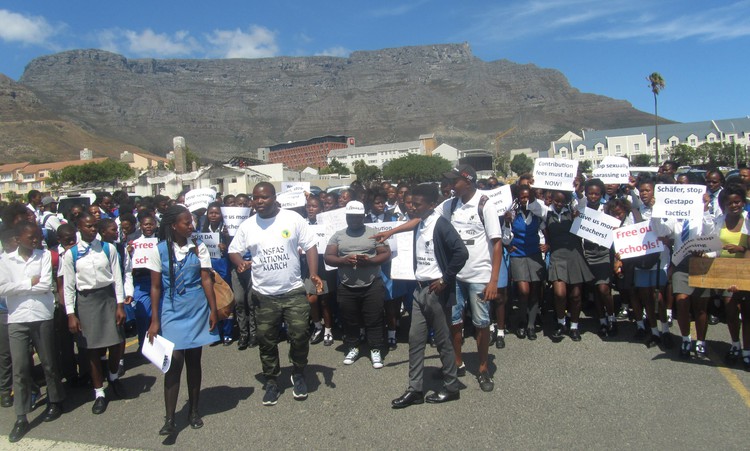 Learners from Bulumko Secondary School are calling for more teachers for their school. Photo: Bernard Chiguvare

The march was organised by Congress of South African Student (COSAS).

They protesters marched from Keizersgracht street, down Darling street, and then gathered in front of the WCED.

Although the Deputy Director of the WCED came to receive the memorandum COSAS refused to hand it over to him. Protesters instead demanded Education MEC Debbie Schafer.

“The MEC has been neglecting our schools for a long time. If she does not intervene now then we are going to intensify this struggle. We will make sure she leaves the office,” said Michael Mayazo, COSAS chairperson Western Cape region.

Mayazo said: “We want the department, to deploy teachers at Bulumko and other schools in Khayelitsha. Since opening of the schools this year the learners have gone for months without some subject teachers.”

Jessica Shelver, spokesperson for Schafer, told GroundUp the WCED was aware of the shortage, but that the school had “extremely high growth” this year. “The school needs five additional posts. The department granted this request on 14 February, and has provided four substitute teachers and one growth post from the district’s allocation of posts. Our circuit manager visited the school immediately when learners protested at the school on 8 February, and has continued to liaise with the school. The circuit addressed the school management team, the representative council of learners, and learners.”

Shelver said that classrooms are becoming overcrowded in the Western Cape. “The current teacher to learner provincial ratio is 1 to 37.”

After waiting for the MEC for about an hour, the organisers called an end to the protest.