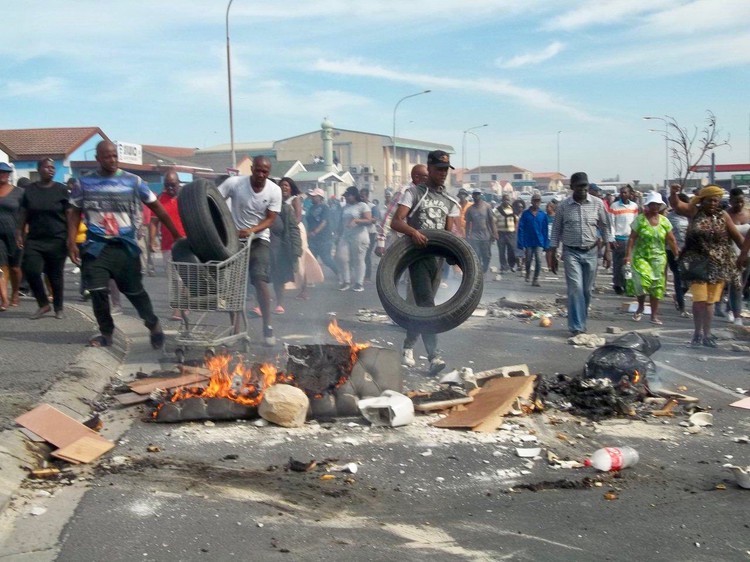 People outraged by their water bills blocked Spine Road and Ntlazane Crescent with burning tyres on Thursday. Residents of Ilitha Park and Phakamisa marched to the Khayelitsha Administration Office to demand that the City of Cape Town “scratch off” their sky-high water accounts.

The protesters said they are “victims of inappropriate, estimated and actual high water bills” and had been “subjected to water disconnections” and deprived of basic human needs.

In a memorandum they demanded the City install new meter boxes that would calculate water use correctly and provide “free, clean water for senior citizens and clean water for all”.

Bishop Derrick Mtsolo of Litha Methodist Church led the demonstration. “Don’t come here individually to ask questions about your inflated water bills. We must come as the whole community,” he said.

He said officials had given him a written response to their demands, but he said “we want the City to send senior officials to a community meeting to explain what the document says in Xhosa.”

Ruth Yiba and her husband are both 63 and live on their pensions. They also support their two grandchildren. Yiba says they only gets water between 4am and 11am. She wakes up at 4am to fill 25-litre buckets for the day. But, she says, she still owes R10,000 for water.

Xoliswa Magutywa, 64, stays with her two grandchildren in Ilitha Park. “I pay R500 for water monthly and struggle to buy food and electricity with the remainder of my pension,” she said. “In December, I went to Ngqushwa in the Eastern Cape to spend Christmas Holiday with my family. When I returned, I found that my water bill had increased even though there was nobody home.”

She said she currently owes R20,000. “I want the city to scrap the whole nonsensical bill and start counting my water usage afresh … I used to pay the city R500 monthly, but I stopped after my bill kept on growing though I was paying.”

Nombeko Siko, 64, said, “In the mornings, my grandchild goes to school, my daughter goes to work and I leave to char around the township. During the day nobody uses water, but our water bill goes up.”

A statement from the mayor’s office said that the City needed specific customer account details in order to respond. It said there may be various reasons for the high bills.

Water is not disconnected from houses, but restricted “when necessary” to 6,000 litres per month, or 200 litres per day. “Customers are therefore not deprived of water as a basic need.”

The statement also said that debt for some households may not have been written off because of a refusal to allow water management devices to be installed.