Picket held outside NPA and SAPS 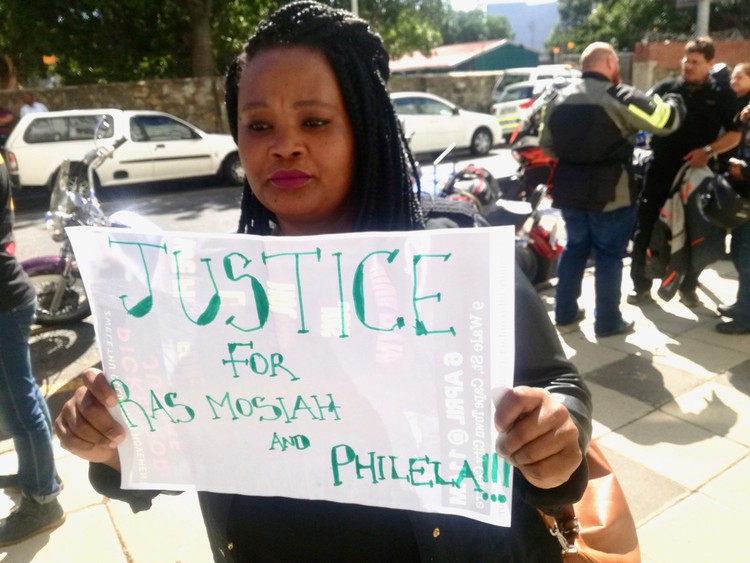 Nolusindiso Zuma pickets outside the office of the Western Cape Police Commissioner to demand justice for her brother who was murdered in Khayelitsha last year while occupying land. Photo: Thembela Ntongana

About 15 people picketed outside the offices of the National Prosecuting Authority (NPA) and the office of the Western Cape Police Commissioner on Friday morning, to demand justice for the murders of Mthunzi ‘Ras’ Zuma and Philela Gilwa.

“We will not let this be just another cold case. A life was lost. The police need to understand that. We want answers,” said Zuma’s sister, Nondumiso Zuma.

The murdered men were at the forefront of the large scale Khayelitsha land occupation near the Magistrates’ Court in May last year. Zuma was murdered on 28 May 2017, allegedly by two men who climbed out of a car at a street barricade during protests. Gilwa was murdered on 15 July while walking to Mandela Park with two other land occupiers.

In August 2017, the case against the man accused of murdering Zuma was indefinitely postponed after the docket went missing.

Nondumiso told GroundUp that her mother had not been coping since the murder. “No one wants to see their child die before them, especially in that manner. We have to constantly go to the police to ask what is happening. They are not telling us anything,” she said.

In a memorandum, the picketers asked that the two cases be moved out of Khayelitsha. They want charges reopened against those accused of murdering Zuma.

Protester Mabhelandile Twani said they had lost faith in the police. “We have met with the Khayelitsha cluster commander and the investigators handling the cases many times, but we always come out with nothing concrete.”

“The police are harsher on the people who were occupying land than those who have committed murder, and that is why we are here today. We want answers,” said Twani. The protesters want charges brought against land occupiers to be dropped.

Zama Timbela, who was also picketing, said, “There are witnesses who have come forward. The police know that. People saw Ras being murdered, but nothing is happening. No one is being arrested.”

Chris Green, Head of Security and Risk, received the memorandum on behalf of the NPA. He said he will send it to the relevant people to respond.

Brigadier Fred Alexander signed the memorandum on behalf of the Western Cape Police Commissioner. He said he will consult with the head of the investigation to see how far the two murder cases were.