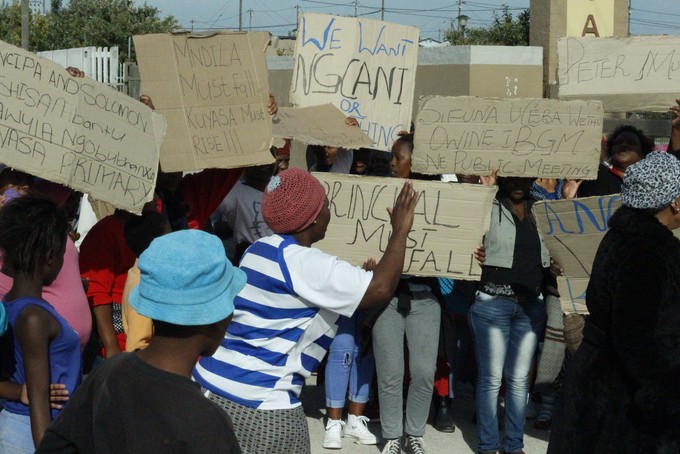 Residents of two Khayelitsha wards closed Kuyasa Primary School today in protest against what they say are unsafe conditions. The residents were also protesting at the ANC’s choice of candidate for the two wards in the municipal elections.

Residents told GroundUp the school had problems with gas leaks and explosions, some of which had resulted in injuries.

They called on the Western Cape Department of Education to ensure the safety of students and employees at the school. The protesters complained about a lack of communication by the principal.

Department of Education spokesperson Jessica Shelver said district officials had been called to the school at 8am where they were told that a group of ANC supporters had attached chains and padlocks to the school gate, preventing students and staff from entering.

She said there was no truth in allegations of unsafe conditions at the school. “The kitchen that was damaged is not being used. The school is part of the sandwich programme, and receives sandwiches delivered every day. There is therefore no safety risk as claimed.”

The protesters were also angry about the ANC’s selection of ward councillor candidates for the August municipal elections in wards 97 and 98. They claimed that in public meetings residents had chosen two candidates but the ANC had put forward two different people.

Lonwabo Mqina, one of the protest leaders, said Nomaindiya Mfeketo, Deputy Minister of International Relations and Cooperation, had addressed residents in early April, promising that their concerns would be taken into account. More than two months later, nothing had happened, said Mqina.

The school had been chosen as the site of the protest to draw attention to the unsafe conditions there, and because of its status as a voter registration station. The protesters planned to keep the school closed until the ANC addressed their concerns, he said.

Bulelwa Kanani from ward 98 said the ANC was not taking residents seriously.

“The party is showing us they do not care about us as its members and if they do not correct this we will not vote.”

Khanyiswa Ntwanambi from ward 97 said: “We are given the ANC ward councillor, not the people’s ward councillor. They told us to choose who we wanted but in the end they do not give us who we want. We do not want the person they have chosen to lead us. Every time they get us people who do not even stay in these communities, who do not know the issues we are faced with,” said Ntwanambi.

The Independent Electoral Commission has set this Thursday, June 2, as the final deadline to declare candidates.

ANC provincial executive committee spokesperson Jabu Mfusi says the list that has gone out is a provisional list.

“There is no final list as of yet and the members of the ANC know that if they are not happy they can appeal. The final list will only come out after the national list conference, which is tomorrow,” said Mfusi.