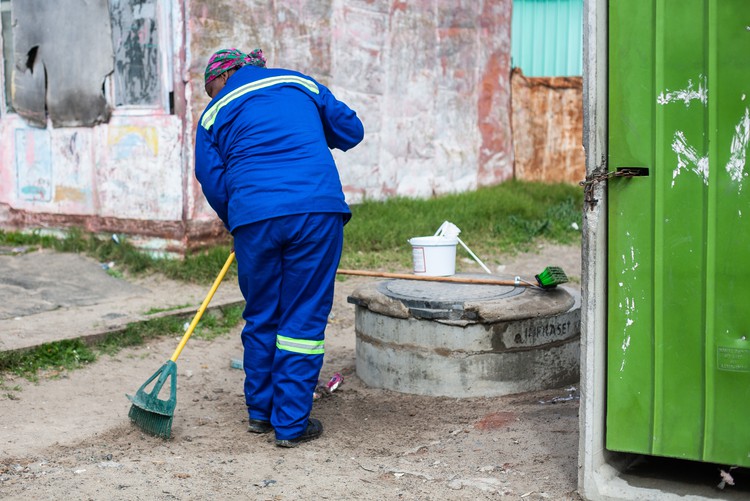 From 7am until 5:30pm, janitors of Mzomhle in RR Section, Khayelitsha, don their overalls, pick up their equipment and go about the informal settlement, cleaning toilets and collecting rubbish. They work eight days, including weekends, and then have six days off, earning R1,890 for the fortnight. There are two teams, one with 18, another with 20 janitors. Some of them spoke to GroundUp under condition of anonymity.

Although they have been working since June, employed under the Expanded Public Works Programme, they have not yet had inoculations against hepatitis A and tetanus, and they worry about their safety.

“You should see the state of some of the toilets that we clean, absolutely dirty. Just the other day we had to attend to a blocked toilet that was in a bad state,” said one janitor.

“We are so grateful for this job opportunity because we have all been unemployed before this, and it was very hard because most of us here are breadwinners. But we are worried that our safety is being taken for granted.”

“We have enquired from our supervisor about getting injections to protect us, but so far we have not received a clear answer,” she said.

She said they have masks but no longer have gloves. They were issued with disposable gloves when they started.

Zukiswa Qezo, from the Social Justice Coalition (SJC), who lives in RR Section, said, “The janitors were supposed to have been inoculated before they even began working. It’s been two months now on the job and they are still not inoculated.”

“This has been going on since last year – where janitors complain about not receiving the necessary inoculations,” said Qezo.

Mayco Member for Water and Waste Xanthea Limberg said inoculation was scheduled for mid-September. She said they could not start inoculations as planned during August because of disruptions caused by Covid.

“Inoculations are at times carried out in the office or the relevant sub-councils, but since the pandemic, it has been challenging to secure other venues,” said Limberg.

Limberg said vaccinations were based on a specific job hazard risk assessments. Blood is tested for hepatitis A immunity and janitors are vaccinated against tetanus. She said all staff are provided with masks, hand sanitiser and gloves.