“How many of you have been on the housing waiting list for more than 20 years?” Half the room raised their hands. 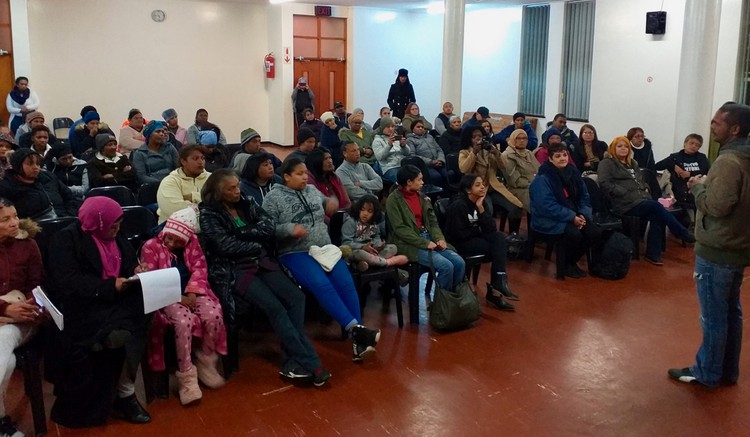 Fadiel Adams of the Gatvol Capetonian group addressing residents in Kensington. The coomunity plans to shut down a number of areas in a housing protest on Thursday. Photo: Barbara Maregele

“I’ve had enough with the council and their waiting list … I’ve given up hope of getting my own house,” says Sheron Newman, a 58-year-old backyard dweller from Kensington. “I’ve been on the [housing] waiting list since 1991. I’ve been updating my details so many times but that’s as far as it goes.”

Newman was among about 50 people who met in Windermere, Kensington, on Wednesday night to discuss the community’s plans for a Total Shutdown protest to be held on Thursday morning.

Kensington residents, along with at least 12 other areas, including Parkwood, Beacon Valley, Delft and Ocean View, are expected to blockade the main roads leading in and out of their communities from 5am.

The residents are mostly backyard dwellers. They believe the shutdown will draw attention to their repeated calls for housing opportunities across the Cape metro.

Several messages have been shared on social media this week, warning residents to prepare for possible disruptions or delays.

Newman rents a small room in Kensington for R1,000 per month. “I’m renting for six years without hot water or anything … I’m sitting here with no hope, absolutely no hope,” she said.

Daphne Fredericks, 55, rents a two-bedroom home and pays R7,500 per month. Fredericks says she has been on the waiting list for over 25 years. “I’m desperate for a house. I wanted to come and hear what they had to say. I’ve been to [council offices in] Wale Street to find out if there’s anything.”

“Every time I’m told, ‘It’s not your turn yet’. But younger people are getting places before me. How can they say it isn’t my turn yet?”

Fredericks said she was battling to make ends meet. She is currently being supported financially by her adult son. “I need a place, but I also have a 15-year-old son still at high school in the area, so for me to go stay in Malmesbury or Delft would be an issue,” she said.

The meeting was called by the Gatvol Capetonian group who are known for their controversial statements about the “oppression of coloured people in Cape Town”.

The group’s Fadiel Adams told residents: “I’m not telling you how to protest, but we are against anyone throwing a stone at a car, looting shops or burning a robot. If anyone does this, that person must face the law.”

“I apologise to anyone who will miss work but you have to understand that we are asking you to sacrifice one day for everyone else’s future,” he said.

Adams asked: “How many of you have been on the housing waiting list for more than 20 years?” At least half of the room raised their hands.

“They build RDP houses in Mitchells Plain, Bonteheuwel and Manenberg. And when they build houses, they build 24m2 structures, too small for a family,” he said.

In a statement on Wednesday, Mayco Member for Safety and Security JP Smith said: “The City supports peaceful protest action, but calls on participants to respect the rights of others by not preventing free movement, and to refrain from damaging any public or private infrastructure or placing any lives at risk.”

Leaders from the various communities plan to handover a memorandum of their demands to President Cyril Ramaphosa, the ministers of Public Works and the MEC of Human Settlements at Parliament. Police are expected to be monitoring each of the areas.