“Kensington police station is a museum” 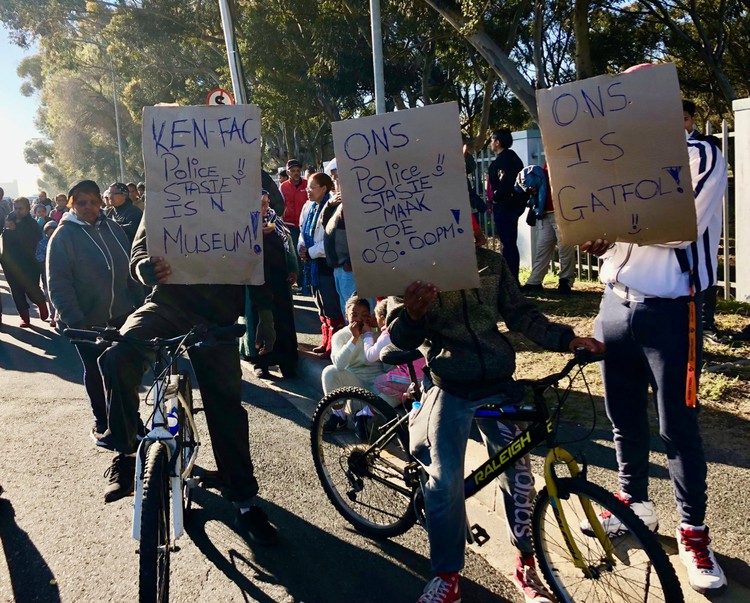 Kensington residents protest against what they believe is the poor response to crime in their area by SAPS. Photo: Tariro Washinyira

Scores of residents from Kensington and Fractreton blocked traffic on Friday morning in a protest against ongoing gang violence and inadequate policing in their area. The protesters, including school children, divided themselves into three groups, closing 18th, 12th and Fifth Avenue.

A leader in the protest, Kevin Alexander, said authorities had not granted them permission to protest, but the community was fed up.

Posters read: “Kensington and Fracterton police station is a museum”; “We want a future too – stop shooting”.

Alexander, who has lived in Kensington for over 50 years, said, “This is an area with four gang groups. Police are invisible … Last year in July I wrote to the Western Cape police commissioner. This month I wrote to the Minister of Police, Bheki Cele, and nothing has happened … So the community has agreed to block the roads and have a peaceful protest from 5am to 10am.”

Glen Fredericks, who works in the area, said, “The police are incapable of handling these gangs. The shootings have been going on for months.”

Resident Isabel Norris is in matric at Windermere High School. She said, “The shooting is terrible. I can hear it from my room … I feel like my future is being taken away from me. Poverty and unemployment won’t go away from my community unless these gang fights are stopped.”

Another high school learner said, “You don’t know when they are going to shoot. How can you concentrate in the classroom when there are people shooting?”

Resident Robin Williams said, “The police working in our community don’t know the area well. They get lost when we call them. Most people who also stay in Factreton speak Afrikaans, but the police at Kensington … can’t speak Afrikaans, so there is a language barrier.”

Maureen Hartogh, who stays near Windermere High, said last week two bullets went through her son’s bedroom. Her son has an 18-month-old baby. “It’s like a war zone. We have civil war in our communities and the government is doing nothing to protect us … They shoot all the time and we are tired.”

Captain FC Van Wyk of the Western Cape police said, “The protesters were peaceful and a request was made to disperse … At 10am this morning they dispersed peacefully and engaged with the Kensington SAPS management, ward councillor Helen Jacobs and the Community Police Forum executive. They requested a number of things including more resources.”

Van Wyk said, “A case of convening a gathering in respect of which no notice or no adequate notice was given in accordance with the provisions of section 3 (Act 205 of 1993 article 12(A)) was opened for investigation.”