Shack dwellers who own houses will have their shacks destroyed, warns municipality 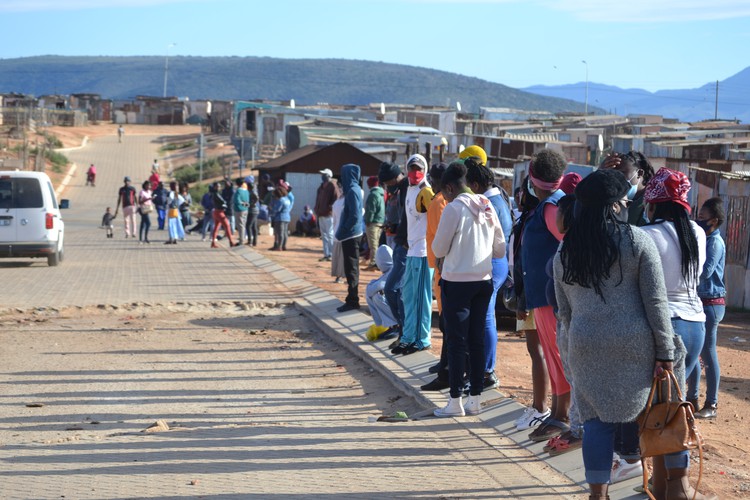 Shack dwellers from Area 11, Gunguluza in Kariega queued on Monday to check whether their homes have been included in the Nelson Mandela Bay Municipality’s database. This comes as the City is to start documenting and formalising 140 informal settlements. Photo: Thamsanqa Mbovane

Dozens of shack dwellers from Area 11, Gunguluza in Kariega, were seen queuing on Monday to check whether their homes have been included in the municipality’s database.

It follows the demolition of about 60 shacks in the area at the weekend that were deemed to be unoccupied. From Thursday, the Nelson Mandela Bay Municipality is expected to start documenting in order to “formalise” about 140 informal settlements across the city.

Mayco Member for Human Settlements, Masixole Zinto, said: “A budget of R300 million will be used to bring services to 140 informal settlements such as water and sanitation. We have decided to formalise the informal settlements but no further invasion of land will be allowed in the city. We will evict those invaders from the land.”

Area 11 development committee chairperson, Siyabonga Stemele, said he had told residents that the demolition was out of the committee’s hands. “If you don’t stay in your shack for a long time, it will be demolished, especially if it does not have furniture,” he explained.

Resident Nokulunga Menta, who had joined the queue, said she had not been living in her shack for over six months because she was worried about bringing her newborn son to a home without access to water, a toilet and electricity. “Many people are relieving themselves in the bush and in storm water drains … and this means the area is unhygienic for a baby,” she said.

Ward 45 Councillor Siphiwo Plaatjies said, “The area is overpopulated. The municipality is trying to make sure the sites and [residents] are verified. We agreed with land planning and Human Settlements that streets will be tarred in that area in order to service the people.”

Plaatjies warned that residents who have title deeds on the municipality’s database and who are found to be occupying shacks, could have their shacks destroyed. “The municipality cannot allow people to have two houses. If the municipality finds out you don’t stay in your shack, it will create a space for another person by removing your shack from the area,” he said.