Until 15 December, employees at businesses that have not reopened can receive R3,500 per month 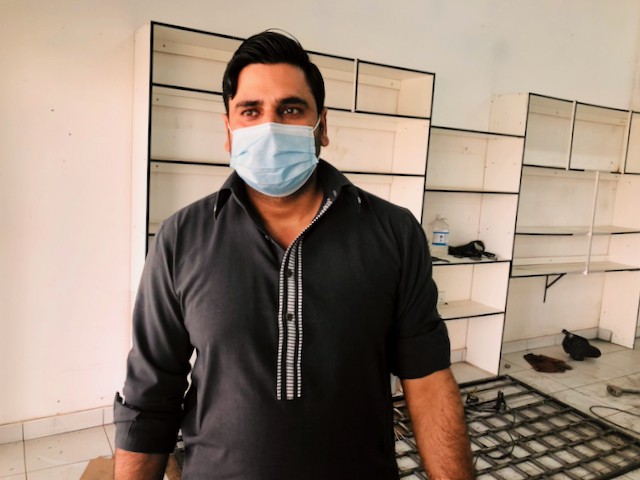 Mushtaq Zeeshan is slowly rebuilding his appliances and furniture store in Tsakane Square, Brakpan, which was looted in the July unrest. He is working alone. His employees have left. Photo: Kimberly Mutandiro

The Unemployment Insurance Fund (UIF) has opened applications for temporary relief funds made available to all Gauteng and KwaZulu-Natal workers affected by the July unrest. Applications for the relief fund – Workers Affected By Unrest (WABU) – opened last week.

According to Makhosonke Buthelezi, UIF communication and marketing director, the funds are part of the R5.3 billion Temporary Employer/Employee Relief Scheme (TERS).

Until 15 December 2021, the relief will be paid at a flat rate of R3,500 per month to workers while their places of work are unable to open due to damages sustained in the riots. (Download the WABU presentation.)

However, WABU funds are limited to employees registered for UIF, but who are not already receiving unemployment claims from the UIF.

Also, the employer must provide details of the destruction and submit documentary proof of a report made to the police, a case number, and if insured, proof of insurance claim.

Employers are being urged to apply on behalf of their employees through the TERS online portal. Money will be paid directly into the employee’s bank account.

Akesh Mahabir, owner of Pedros Chicken at the looted Pan Africa Shopping Centre in Alexandra, said he employed 13 people. He opened in November 2020. He has not been able to pay his employees since the riots shut his shop in July.

One of the employees, Promise Nyandeni, said she has been struggling. Her rent is in arrears and she has accumulated debt. “Life has been hard. My two children, mom and sister depend on me as I am the only one who had a job,” said Nyandeni.

Owner of a Build It franchise at Tsakane Square in Brakpan, John Vantonder, said he managed to pay his ten employees full salaries in July, but could not meet their August salaries. He welcomed the relief fund. However, his full-time employees are registered with UIF, but his temporary employees are not.

“My temporary employees are my main worry,” he said. He intends to register them for UIF and hopes they can still qualify for the relief funds.

Shepherd Chikane, a Build It employee, said, “We have been worried about what we were going to do come month-end. It’s difficult to buy food let alone meet other expenses. The looting really affected us.”

But for some employees it may be too late. Mushtaq Zeeshan has sold electronic equipment, appliances and furniture in Tsakane Square for five years. He said he lost over R800,000 worth of stock in the looting. He is slowly rebuilding the shop on his own.

He was unable to pay his two employees and they have now gone back to homes in the rural Limpopo and KwaZulu-Natal. He has no way of contacting them.