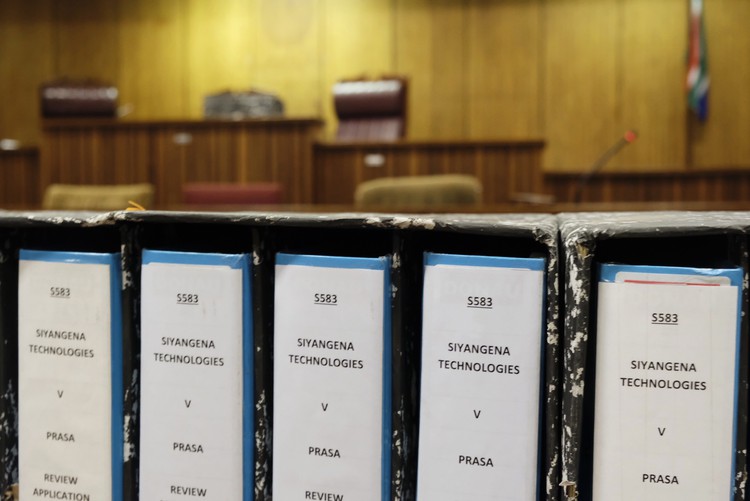 Argument in the Siyangena v PRASA case, in which billions of rands are at stake, was supposed to get underway in Pretoria on Monday. Photo: Elna Schutz

The case between The Passenger Rail Agency of South Africa (PRASA) and Siyangena Technologies (PTY) Ltd was meant to start on Monday, but it has been postponed, largely because PRASA only secured lawyers for the case a few days ago.

While the parties easily agreed that a postponement was necessary, they could not decide on a date given the number of schedules to coordinate. Judges Raulinga, Ranchod and Holland-Mutter, sitting as a full bench in the North Gauteng High Court in Pretoria, gave a verbal order that gives preference of choosing a date to Siyangena.

Judge Raulinga said in the order that the other parties “must cooperate” with the procurement of a preferential date, even if that means members of counsel or even the judges are replaced.

The advocate for Siyangena, Nic Maritz, strongly pushed for this, calling the delay a “massive disruption”. He said that PRASA should not be overly accommodated since it “created the predicament”.

He explained that there are two aspects of prejudice to support this preferential treatment, namely the costs that Siyangena has incurred and the delay in the hearing. Raulinga agreed, saying: “We admit that the delay has been inordinate.”

The case was delayed when Werksmans attorneys dropped the rail agency as clients over unpaid bills. PRASA’s postponement application acknowledged this and blamed it on the “financial and operational challenges which it has been experiencing”.

But Werksmans attorneys were back in court on Monday. The company was paid a few days ago. It has been assured by PRASA that the Werksmans bill is being prioritised so that such a situation is avoided in the future.

Siyangena had been contracted to install various security systems, including access gates, at PRASA stations as early as 2010. Two processes of arbitration on claims for payment were instituted by the company but put on hold when PRASA approached the courts to have the contracts set aside because of flaws in the procurement process. According to court papers, these agreements amount to about R6 billion in value.

Commuter activist group #UniteBehind was admitted as a friend of the court late last year. At the time it was concerned that PRASA would enter the case unrepresented.

In a statement on Monday, #UniteBehind said: “The state capture case against Siyangena would have been dead in the water had [we] not brought an application to compel PRASA to appoint or reappoint their lawyers. … #UniteBehind is looking forward to the completion of the Siyangena matter with anticipation, as a likely ruling against Siyangena will strike out one of the revenue streams of former President Jacob Zuma’s friends.”

The group has also launched litigation in the Cape High Court opposing the appointment, by the Minister of Transport, of Bongisizwe Mpondo as Administrator of PRASA. Instead, #UniteBehind wants the appointment of a permanent board.

#UniteBehind has criticised PRASA, in particular Mpondo, for failing to pay its lawyers. It has also criticised Mpondo’s appointment of an advisor, Themba Camane, who “initiated the unlawful Siyangena expenditure in 2010”.

The case may return as late as September this year or early next year. The matter has been ongoing since 2018.

The judges ordered PRASA to pay “the wasted costs occasioned by the postponement” to Siyangena on the attorney and client scale.

About the failure of PRASA to pay its lawyers and therefore causing the delay that led to this punitive cost order, #UniteBehind said, “Mpondo has incurred costs that amounts to unlawful expenditure in terms of the Public Finance Management Act. He should be liable in part for such costs.”