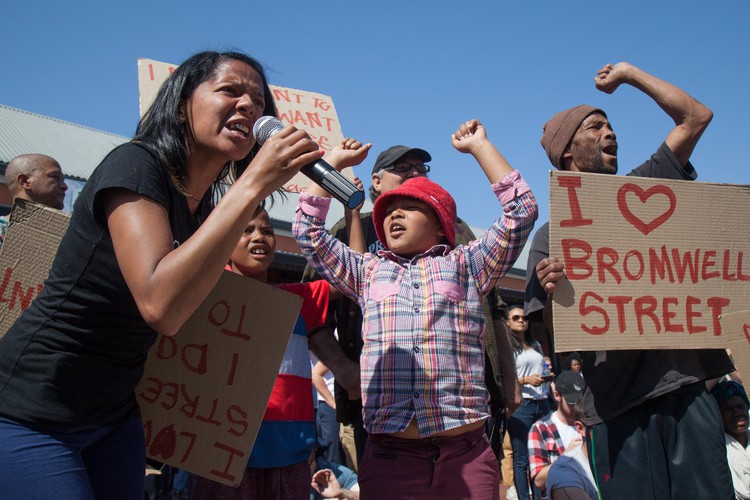 Residents of Bromwell Street in Woodstock have been campaigning against their pending eviction. Photo from August 2017: Ashraf Hendricks

By Denise Patterson and Ashleigh Furlong

The Western Cape High Court once again recommend that the parties in the Bromwell Street eviction case mediate outside of court.

This was suggested by Acting Judge Mark Sher on Wednesday, the second day of a court hearing that will decide the fate of 27 residents of Bromwell Street, Woodstock, who are facing eviction. (Read GroundUp’s report on the first day.)

The residents, represented by Ndifuna Ukwazi Law Centre, are arguing that the City should provide them with accommodation that is as near as possible to their current homes.

However, the City contends that the accommodation that it can offer “as near as possible” to the Bromwell property, is Wolwerivier, some 30km from Woodstock.

Sher also reiterated his concerns about the residents moving to Wolwerivier. He expressed fear that if they move to Wolwerivier they will never return to Woodstock.

While he said he understood the importance of following the law, he said he is aware that the relevant personal circumstances of each resident should be taken into account when he makes his ruling.

“It’s unfair and tragic … the law is what the law is, but it is tragic that people would have to go to Wolwerivier and there could have been some place closer to Woodstock for them to stay”, the judge said.

Advocate Karrisha Pillay, for the City, told the court that the City had not changed its stance on the issue since the case first began.

The City also argues that there needs to be fairness in their provision of housing assistance and that if they offered the residents accommodation in the city centre when there are many people waiting for permanent housing this would be an “unfair, haphazard and potentially discriminatory approach”.

In its court papers, the City said that it is in the process of establishing a number of other affordable housing programmes in the City. These include both social and transitional housing developments. The City released a statement in this regard on Wednesday, setting aside several properties near the city centre for affordable housing.