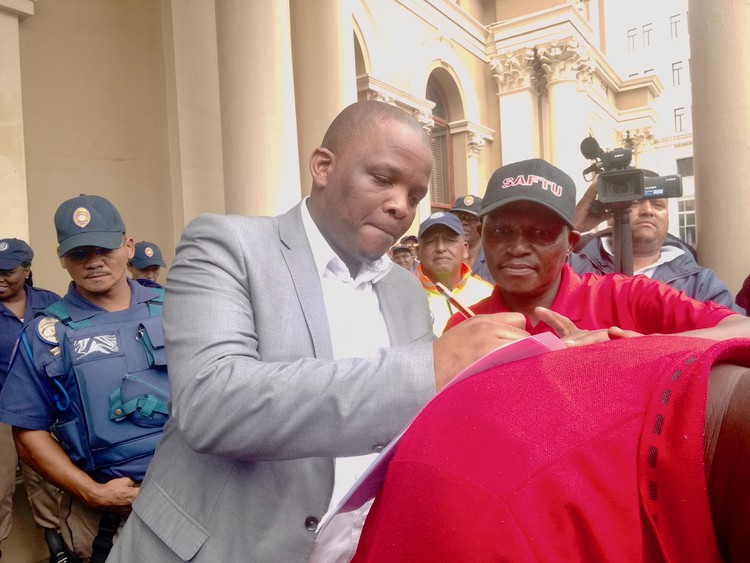 The demonstrators wanted to march to Military Road, two streets away, where a council meeting was in session, but were stopped by armed metro police and SAPS officers monitoring the protest.

The protest was led by the Democratic Municipal and Allied Workers Union of South Africa (DEMAWUSA) and the South African Federation of Trade Unions (SAFTU). It was also supported by the EFF.

DEMAWUSA provincial coordinator Siphiwe Ndunyana said the union demanded that “left out municipal workers” be permanently employed as per a council resolution of 4 December 2018.

The resolution came from a motion tabled by the EFF during the DA-led coalition. However, the resolution has not been entirely implemented. Only certain workers were insourced.

Acting Nelson Mandela Bay Mayor Buyeye Tsonono left the council meeting to attend to the protesters. He accepted the memorandum of demands.

Ndunyana told the mayor: “We want the municipality to implement these resolutions in the blink of an eye!”

In April 2019, GroundUp reported on the demand by municipal securities guards for permanent jobs.

Thabo Chochoe, regional secretary of DEMAWUSA, said: “We worked as call centre operators since 2010 but only got permanent on 1 March last year, after protests, through the intervention of then Mayor Mongameli Bobani.”

“Now the municipality want to work with the National Treasury to reverse the council resolution.”

“As call centre operators, it took ten years for some of us to be employed permanently last year,” he said.

Tsonono said: “We were sober when we took the decision to insource security guards and others as the black caucus … We are not about reversing them.”

“We cannot be a council that takes unlawful decisions. But we still stand by our decisions that are progressive and that will benefit our people.”