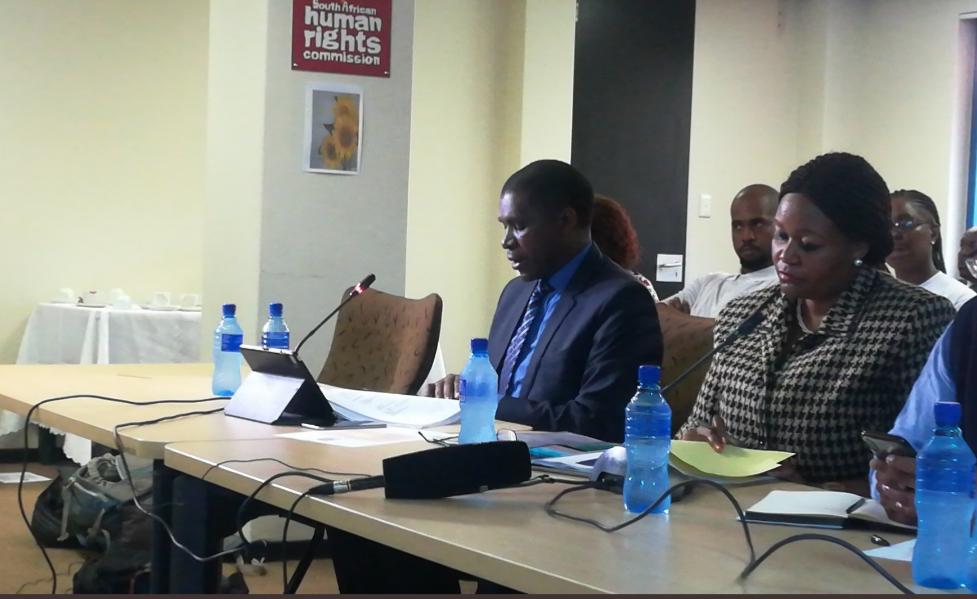 Johannesburg City Manager Ndivhoniswani Lukhwareni made submissions at an inquiry conducted by the South African Human Rights Commission on what services the City has provided to Alexandra. Photo: Zoë Postman.

On Thursday, the South African Human Rights Commission (SAHRC) started an inquiry into the recent spate of protests in Alexandra. The inquiry will consider some of the issues raised during the protests such as the lack of housing, water and sanitation in the township.

City of Johannesburg’s City Manager, Ndivhoniswani Lukhwareni, made submissions at the inquiry on what the City has done for the area and some of the difficulties it has faced.

Lukhwareni began by telling the panel that informal settlements only receive basic services as opposed to affluent suburbs that receive additional services because they are able to pay for it. He said there were over 200 informal settlements in Johannesburg and most of these have existed for more than five years.

He said Alexandra was a difficult place to service because of its spatial planning. The township was very dense and difficult to navigate using heavy machinery which has had an effect on services like rubbish collection.

Lukhwareni said the City wanted to use long and big trucks to collect all the rubbish at once, like it does in other suburbs, but the density and lack of infrastructure in the area does not allow it to do that.

The Expanded Public Works Programme was created to assist with rubbish collection, Lukhwareni explained. “But it created more problems when the same people wanted permanent jobs and the City could not absorb them … Now the programme is not operating as intended and this affects the beneficiaries of the service.”

Despite these difficulties, Lukhwareni said the City collected rubbish in the area every day.

But Alexandra Ward Councillor Adolph Marema disputed this. He said the rubbish was not collected every day, sewage was spilling into the streets and the City was not doing anything about it. “He is bringing up all these issues but they are the ones who are supposed to come to the community and prevent these problems from happening,” he told GroundUp. Marema said the community had complained several times but to no avail.

“He is painting a very different picture from the reality we experience in Alex … In fact I want to live in the Alex he is talking about,” Marema said.

Lukhwareni said there were about 1,175 chemical toilets in Alexandra. One toilet services about 11 households, which he said was “not that barbaric”.

One of the SAHRC panelists, Princess Ka-Siboto, asked Lukhwareni if the provision of basic temporary services, like chemical toilets, in informal settlements was still appropriate after most of the settlements have existed for more than five years.

Lukhwareni said development in these areas has been slow because the City has to get approval from the community before implementing plans. He said negotiations with the community takes longer than a year and “these issues are not cheap”.

But the inquiry ended early because the SAHRC panel said the City was not adequately prepared. The panel said it will reconvene on 13 May to give the City more time to prepare a comprehensive report.