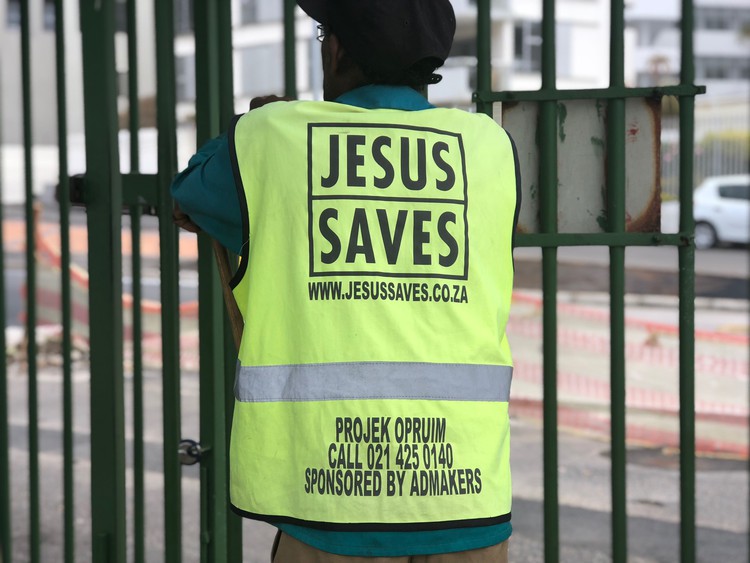 By Rebecca Redelmeier and Kamilah Tom

The Jesus Saves programme aims to restore dignity to people living on the streets of Sea Point. But some of the people it tries to help accuse it of harsh, undignified methods.

“It seems like I’m sentenced, like in prison,” said 30-year-old Xolile, who has lived along the Sea Point beachfront for the past two years and has worked for Jesus Saves while living on the streets.

Xolile hopes to be off the streets by his next birthday. He said he works for Jesus Saves on days when he is desperate for money. “I tell myself, ‘Okay, go and sweep.’ It is better than doing crime.”

Since August 2017, the Sea Point, Fresnaye, and Bantry Bay Ratepayers and Residents Association (SFB) has enlisted the services of Straatwerk, a Christian non-profit organisation, as part of its safety and cleaning initiative. Straatwerk collects a 20% administration fee from each SFB payment. GroundUp has not been able to determine how much or how often SFB contributes to Straatwerk, although the SFB’s most recent audit reflects a payment of R23,600.

Straatwerk’s upliftment programme, advertised as Jesus Saves, recruits homeless people in Cape Town to work four-hour shifts picking up trash and sweeping the streets. The programme offers two shifts a day, seven days a week along the Sea Point beachfront promenade and three days a week on the surrounding streets.

Xolile complained that the R50 a shift Jesus Saves pays is not enough for shelter, food, and transport for the day. Jesus Saves bans workers from going to the bathroom and talking during their four-hour shifts. Straatwerk justifies these stringent rules so that the people it supports can “experience the type of focus needed in life, when engaged on an important mission”.

Street dwellers with bank accounts can get paid R65 a shift via a bank deposit, according to Straatwerk policy. However, most do not have bank accounts or addresses and get the R50 in cash.

Xolile said he could earn much more working as a car guard than working for Jesus Saves. “In that four hours, I can make more, maybe R150,” he said.

Hannes van der Merwe, the manager of Straatwerk’s Ophelp Projekte which runs Jesus Saves, said that people who participate in Jesus Saves by picking up trash on the streets are not workers; instead, they are members of Straatwerk’s “school of life”.

He said Jesus Saves was a strategy for a community to “deal with its, as yet, unemployable and/or otherwise desperate members”. Payment is justified as “financial rewards for successfully completing a session in the ‘school’ according to agreed criteria.”

The SFB website says its partnership with Straatwerk aims to “recruit displaced persons from the beachfront to give them work, dignity as well as encouraging them to go to a shelter and off the street.” However, Xolile said he felt that Jesus Saves took advantage of him.

Xolile complained that working conditions were often at the mercy of the foreman who leads each shift. According to Straatwerk documents, the organisation requires foremen to “rate” each worker on their ability to co-operate and workers are only paid if they “complete the shift to [the foreman’s] satisfaction”.

The document defines a shift — which it calls practising sessions — as, “4 hours on the task, NOTHING ELSE like general talking, resting, smoking, eating, going to the toilet … etc.” Foremen who allow workers to use the bathroom during a shift without prior “arrangements” are “dealt with sternly” according to Straatwerk records.

Straatwerk has also outlined specific procedures to respond to workers who hope to use the toilet during a shift, calling them people who are “still not ‘potty trained’ for life”.

Van der Merwe told GroundUp that these strict policies were implemented because “many in our community come from a very dysfunctional background and it is a fact of life that it will take hard effort to change and improve.”

Xolile has worked with foremen who follow the Straatwerk mandate and prohibit workers from using the bathroom or speaking to each other, but said others had been more accommodating.

Foremen are paid R80 in cash, or R90 if deposited into a bank account, for each shift and can work up to two shifts each day. Most are also homeless from surrounding neighbourhoods who have been recruited and trained by Straatwerk.

According to Van der Merwe, Jesus Saves’ compensation differs depending on whether payment is received by cash or through a bank transfer to prevent the risk of carrying large amounts of cash. He also said that Straatwerk’s pay structure encourages participants to open bank accounts. “Any person who progresses in life can and should operate his own bank account for this purpose. Our system of rewards offers participants the ‘penalty’ for not doing so and the incentive to get it right.”

Though foremen are paid the South African minimum wage, their position with Straatwerk lacks job security. According to Van der Merwe, top-rated Straatwerk team members are trained and then “need to compete with each other to make the team of foremen for the cycle [of three weeks].” Team members and foremen are continuously scored, which can impact their pay rate and chance at being a foreman in the future.

Van der Merwe said that Straatwerk only offers temporary positions because “we are a school that seeks progress, as opposed to employment that seeks stability.”

Xolile said the structure of Jesus Saves shifts have also contributed to his dislike of the programme. In order to collect his pay after each shift, he must accompany the Jesus Saves foreman to the Straatwerk office in town. Although they cover the expense of the trip to the office, Xolile and his colleagues must find their own way back to Sea Point.

“After cleaning, they pay for a taxi for you go to the office downtown to get the money you earned, but they don’t pay for you to come back. I have to spend that R50 to come back.”

Van der Merwe said that Straatwerk intends to open a closer office “once the Sea Point activities have grown substantially”.

Leigh Frances, who guards cars further up the beach and lives on the street in Sea Point, echoed Xolile’s complaints about working for Jesus Saves. “If you ask, ‘What would you prefer, Jesus Saves or car guarding?’ Everyone prefers car guarding,” he said.

For Frances, initiatives like Jesus Saves further highlight the discrepancy between the upliftment programmes sponsored by SFB and the current needs of homeless people in the neighbourhood.

“How do they expect a homeless person to live off R50?” Frances asked. The closest shelter, a Haven Night Shelter in Green Point, costs R12 per night and is 4km away.

For Frances, the Jesus Saves programme is impractical and exploitative. “They have a contract for you to work but they make all the money.”