Pilot scheme to be rolled out over Kouga Municipality 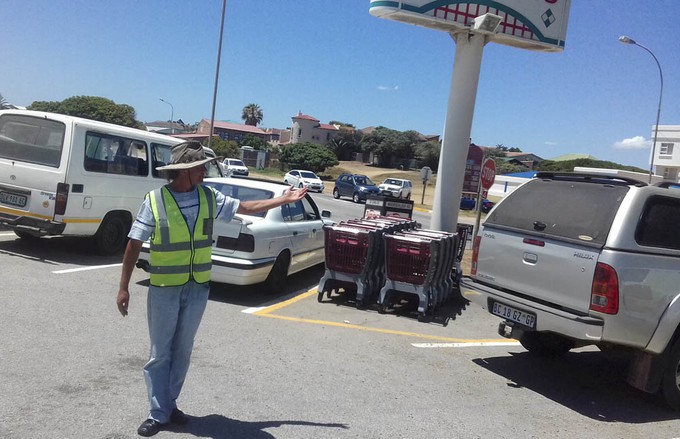 Dozens of informal car guards in the resort town of Jeffreys Bay have been told to stop operating, as part of a clampdown by the Kouga Municipality.

More than 60 car guards have been banned by the municipality and replaced with official guards. The municipality says they were either drunk on duty or had criminal records. The clampdown in Jeffreys Bay is part of a pilot project, to be extended to other towns in the Municipality including Humansdorp.

Kouga Executive Mayor Elza van Lingen said: “Car guards have been getting out of hand in Jeffreys Bay. Shortly after the municipal elections we promised residents that we would clamp down on illegal car guards.”

The municipality was in the process of training and registering new car guards who would work with the local police and private security companies. Official car guards could be identified by their bright yellow caps with the words “J-BAY CAR GUARD” written on them, she said.

“This has enabled the municipality’s law enforcement officers, in cooperation with the local security companies and the police, to act against illegal car guards,” said Van Lingen.

“The car guard programme is part of our efforts to do this. Our area depends heavily on tourism for job creation. Inebriated car guards make it unpleasant for people to visit Jeffreys Bay and it hurts tourism. It is therefore our hope that this programme will help to increase visitor numbers, creating more job opportunities for locals. We are still waiting for security clearance of 21 of the 25 men and women who received yellow caps and got the green light to serve as car guards,” added van Lingen.

Van Lingen said all the informal guards had been given the opportunity to be part of the programme “on the condition that they would be sober and presentable while at work”.

Those who were excluded from the programme are mainly those who were inebriated or caught openly drinking while supposedly looking after vehicles.”

But a 38-year-old former car guard denied the municipality’s claims.

“I don’t drink or have any criminal record,” said the guard, who did not want to be named.

“The process of choosing the new car guards was unfair because most of us were never approached. I am willing to be part of the ‘yellow caps’ because I have been doing this for more than ten years.The municipality chased us away as if we were criminals.”

A colleague added: “I fail to understand what system was used to select the new guards, because I don’t have any criminal record. I spent the entire festive season desperate because I had no source of income. I have now defaulted paying my rent.”

Another car guard, Richard Hugo, said he had been guarding cars since 2004 and did not need training. “There is no reason why I should be removed from here. Some of them even give me money and food. I don’t drink alcohol while at work because it’s not good.”

However another guard, Michael Campbell, said he had been selected fairly. “The municipality and the police called a meeting. Our fingerprints were captured at the police station. We also paid R47 for the entire process. Some failed to qualify because either they did not have the R47 or they did not want to go to the police station. I am feeling safe now because I am recognised and identifiable with this uniform. I also have my own guarding bay.”