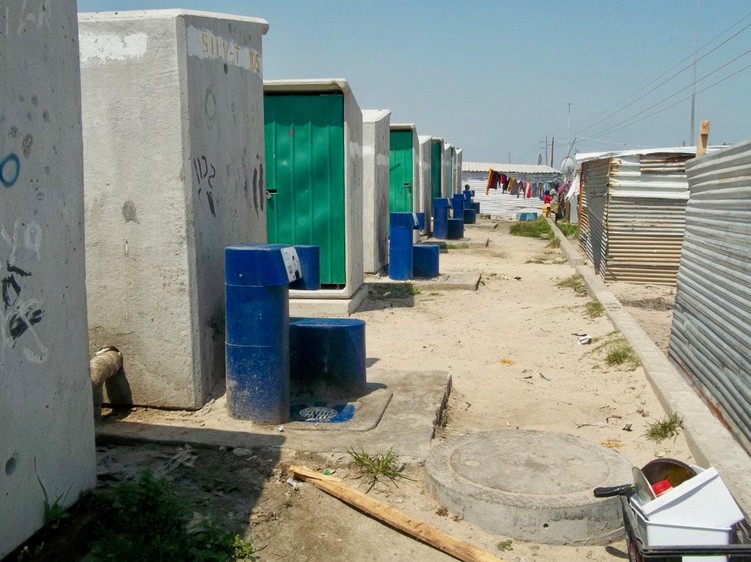 Janitors are battling to keep the communal toilets clean in Blowy informal settlement, Khayelitsha, because the taps and cisterns produce only a trickle of water. Photo: Vincent Lali

Janitors are battling to keep the communal toilets clean in Blowy informal settlement, Khayelitsha, because the taps and cisterns produce only a trickle of water. The janitors say they reported the matter as well as the blocked toilets to their supervisors in October 2018.

When GroundUp visited the toilets this week they were clogged with human waste and the water supply produced only a few drops.

“The toilet cistern doesn’t even produce a drop of water, so I must use grey water to flush,” said Nombasa Mthathi.

She said the problems came after a vehicle from the City of Cape Town disaster management ran over a water pipe and broke it after a big shack fire in October 2018.

Community leader Khanyisa Siwendu said the City installed a new water pipe shortly after this but “the taps worked properly for only one week”.

“The City must force the company to account for giving us taps that don’t produce water,” he said.

Siwendu also wants the City to remove water control devices and to install ordinary water taps. “If a fire were to break out here, we would not have water to put it out,” he said.

Janitor Nozuko Wana said, “We normally clean the toilets with water from the taps. Now, we don’t even touch the blocked toilets because we don’t have water to clean them.”

She and other janitors sometimes go to SST section, Khayelitsha, to fetch water. But Wana said janitors are fighting a losing battle to keep the informal settlement clean without water. “In the mornings, we collect the human waste outside the toilets and dig a hole to bury it. When we return to the toilets again at midday, we come across food and faeces again,” she said.

Faniswa Mfana said that because the water comes out only in a trickle people stand in long lines waiting for their buckets to fill. As a result residents don’t go to the toilets with buckets of water to flush. “It’s disgusting to clean someone else’s shit, but we have no option,” said Mfana.

Mayco Member for Water and Waste Councillor Xanthea Limberg said, “The problems at these facilities are being caused by low water pressure, and is not related to the new taps and toilets themselves. The City has tested pressure on the pipes feeding the area this week [11 March], but tests showed good pressure from the supply side and so we are investigating what other factors might be causing this issue … In the meantime, a repair team and jet machine will be dispatched to unblock the toilets.”

“Regarding the janitors, they are provided with the tools and products necessary to execute their duties and, until such time as the pressure challenge is resolved, we ask that they make use of water from the other standpipes in the settlement,” said Limberg.