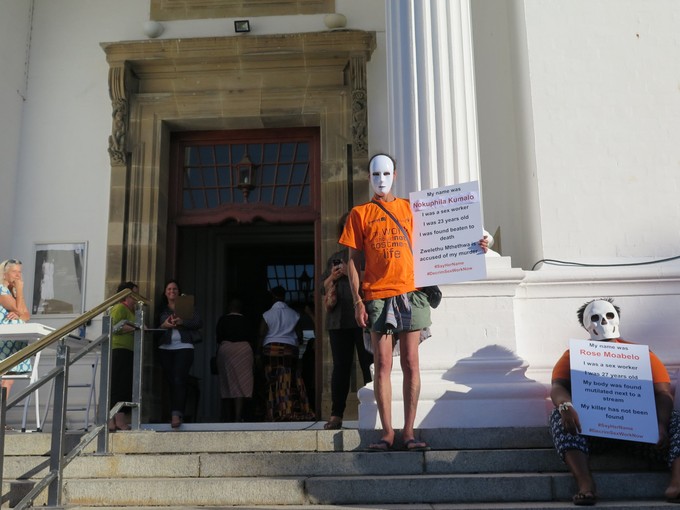 Activists from SWEAT and Sisonke demonstrate outside the Iziko South African National Gallery holding placards bearing the names of murdered sex workers along with the details of their deaths. Photo: Ashleigh Furlong

“My name is Nokuphila Kumalo. I was a sex worker. I was 23 years old. I was found beaten to death. Zwelethu Mthethwa is accused of my murder,” read the placard held by an activist wearing a white mask, standing outside the Iziko South African National Gallery last night.

Inside the gallery, Mthethwa’s work is being shown as part of an exhibition titled “Our Lady”. The official description of the exhibition says it is meant to “interrupt the puritanical and patriarchal visual economy that surrounds imagery of the figurative female form”.

The inclusion of murder accused Mthethwa’s work initially sparked outrage from the Sex Workers Education and Advocacy Taskforce (SWEAT), who saw it as “not only in bad taste but deeply offensive”.

Mthethwa’s work, titled “Untitled” from the Hope Chest series in 2012, features a woman sitting next to a chest that is used as a dowry when a woman marries.

Earlier this week SWEAT released a statement calling for the work to be removed, saying that “the irony of promoting the work of a man accused of murdering women as part of an exhibition aimed at empowering women, is not wasted on us”.

Lesego Tlhwale, SWEAT’s media advocacy officer, said that following SWEAT’s letter to the gallery, Iziko and the New Church Museum who are collaborating with Iziko on the exhibition, reached out to them.

After discussion, Tlhwale said that SWEAT was given space to stage their demonstration outside the gallery and all parties agreed to have a public dialogue on what it means to exhibit the work of a man charged with the murder of a woman.

Iziko and the New Church Museum had originally responded to SWEAT’s statement, explaining that far from promoting Mthethwa’s work, they had wanted to create the opportunity for critical engagement.

They said that one theme of the exhibition is to look at “unnamed women” and the “inherent brutality of denying a woman the right to her individuality and her name”.

But Tlhwale said that the “right thing to do” would have been to first reach out to an organisation such as SWEAT before exhibiting an artwork by someone accused of murdering a sex worker.

In a joint statement released just prior to the demonstration last night, SWEAT, Iziko and the New Church Museum state that while art should “challenge, educate, provoke and disrupt discourse”, the inclusion of marginalised people, such as Kumalo, is not always automatic during these debates.

In an attempt to correct this, they have decided to write a joint statement that will be placed beside Mthethwa’s artwork in the gallery. Kumalo’s portrait will also be included in an upcoming exhibition. The portrait was painted by Astrid Warren, and was based on her mugshot – the only picture of Kumalo that exists.

The action outside the gallery last night included numerous activists from SWEAT and Sisonke standing in masks with placards bearing the names and details of sex workers’ deaths.

“My name was Desiree Murugan. I was a sex worker. I was 39 years old. I was found dead. I was decapitated. My trial is ongoing,” read one.

“My name was Thalukanyo. I was a sex worker. I was in my 20s. My mutilated body was found in the bushes. My killer has not been found,” reads another.

Kumalo was murdered in Woodstock in 2013. More than three years later and after almost innumerable delays, Mthethwa’s trial continues in the Western Cape High Court.

Earlier this week Mthethwa, represented by lawyer William Booth, was granted leave to have the case reopened after additional evidence emerged to support Mthethwa’s claim that he had no recollection of what happened on the night of the murder. Booth showed that Mthethwa had been at Corner Lounge in Gugulethu, where he spent R2,600 on alcohol.

Tlhwale has called the further delays in the trial another “tactic” of the defence and added that regardless of “whatever tricks they [the defence] pull” SWEAT will be at the case when it continues on 5 December.