Residents burn rubbish because it doesn’t get collected

“It’s like they forgot about us,” says resident in East London informal settlement 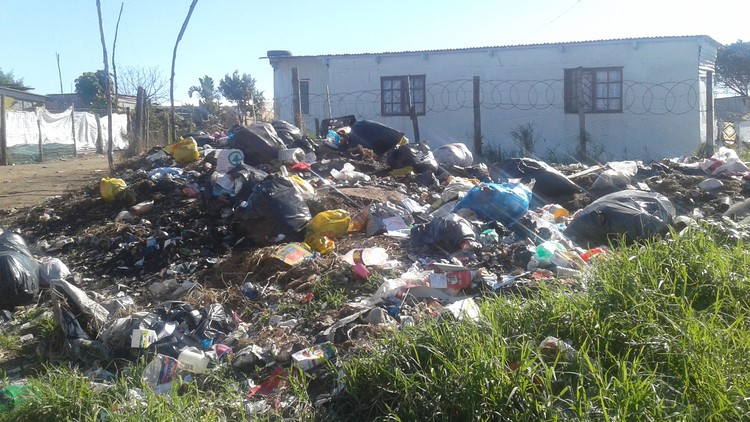 Rubbish has been piling up around Amalinda Forest Informal Settlement in East London. Photo: Nombulelo Damba-Hendrik

“It’s like they forgot about us. This area is very dirty,” says Mike Lokota, a resident of Amalinda Forest Informal Settlement in East London.

Residents have started burning garbage in a bid to rid the area of its foul smell.

“The rubbish is dumped next to my house and all the bad smells and flies go straight to my house,” said Lokota, pointing to a pile of rubbish near his home.

He said the smell of the uncollected rubbish was made worse by the communal toilets.

“They were built two years ago, but are broken,” he said. “We know that the [Buffalo City Metro] Municipality will only fix them after two or three months. That is how long they take to fix them when they are broken.”

The toilets are shared by about 30 families. The pipe that takes the waste out at the back of the toilets broke three weeks ago.

GroundUp visited the area twice in June. The rubbish piles were still uncollected by 26 June and the toilets were still not fixed.

Several residents said they had confronted the municipality’s garbage truck workers who were passing the settlement and were told that they only collected rubbish at formal houses.

Community leader Lisolethu Jack said garbage had not been collected for six months and the pathways in the settlement were filling up with rubbish. “When we realised that the municipality truck was no longer collecting rubbish, we decided to burn it [rubbish]. The area is very stinky. It’s even worse now that we have broken toilets,” she said.

Ward councillor Mzukisi Relu said, “There are times when two weeks will pass and the garbage is not collected and we do not know what is the problem.” He said he has been negotiating with the municipality to build streets in the settlement as cleaning the settlement is a challenge for municipal workers.

On 24 June, municipal spokesperson Samkelo Ngwenya said it was hard to believe that the rubbish had not been collected for six months. He promised to refer the matter to the community services department to “investigate and take action”.

At the time of publication, the situation had not improved.