It’s business as usual for some in drought-stricken Kouga

Residents say they are used to the taps running dry, but how long will Day Zero last? 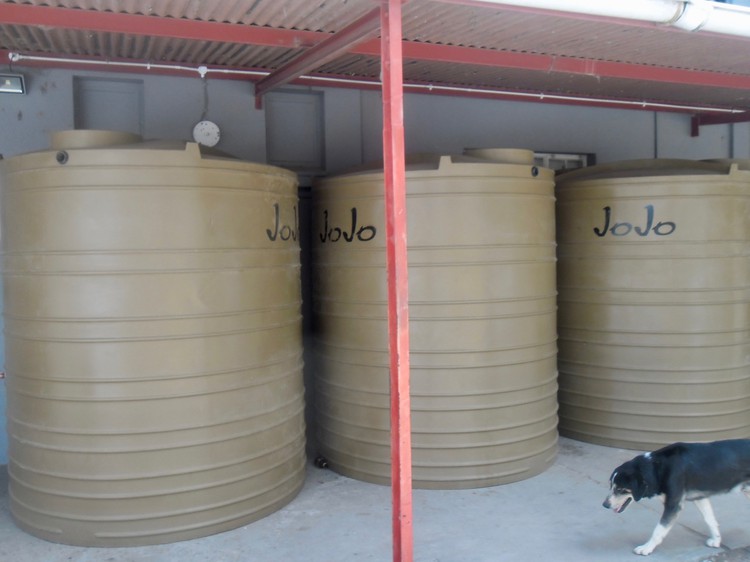 While some residents are not concerned about the drought, the owner of the Hankey Spar has invested in water tanks. Photo: Joseph Chirume

The drought-stricken Kouga Municipality in the Eastern Cape is trying to avoid ‘Day Zero’ when the taps will run dry. But for many residents it is business as usual.

Residents of Hankey and Patensie in the Gamtoos River Valley are facing one of the worst droughts in the history of the area. The Kouga Dam is less than 10% full and Mayor Elza Van Lingen has said the municipality will have to cut water supplies in mid-March if dam levels keep falling.

But at the Hankey taxi rank last week, it was business as usual, with taxi drivers washing their taxis using tap water.

A taxi driver, who did not want to be named, said residents were accustomed to water cuts during the annual maintenance of the Gamtoos irrigation scheme. “There is nothing new with water cuts. The only difference now is that we hear a new word – Day Zero. Every year this town has a period lasting a week or two when water supply in the whole town is shut [off]. The municipality brings water to residents in trucks and we collect it from designated points using containers. Nothing is new with us here.”

Van Lingen said usually the maintenance took place in June and July. This was not of concern yet “because it’s still far away” she said. “Our main concern is this current situation and to find ways that Day Zero does not happen”.

A woman who operates a hair salon in Centerton location said she had always used water sparingly. “Water supply is a major problem in this town. A hair salon uses lots of water. At times I recycle it without the knowledge of my clients. My landlord works for the government and he is always checking his water meter.”

The woman, who did not want to be named, said her business suffered losses during the annual water shut down because she had to hire people to fetch water using 20-litre containers from designated points.

“I am not worried about Day Zero because we have experienced it before. As long as the municipality water tankers are available, I don’t have to panic,” she said.

Thomas Leppan, co-owner of the Hankey Spar, said he had invested in water tanks at a cost of R45,000 in anticipation of Day Zero.

“We are used to water cuts during the period when the Gamtoos River Authority is maintaining their water system. What I don’t know is how long Day Zero will last. I have invested in three water tanks, each with a capacity of five thousand litres. A farmer allowed me to fetch his borehole water to fill these tanks.”

Leppan, who employs 40 full time workers and five temporary labourers, said he did not want to retrench staff.

“This is the reason I have invested in these tanks. At present my workers are safe. I also have a good supplier of bottled water in Jeffreys Bay for my clients.”

But Martie de Beer, principal of DE Miskrall Primary School near Patensie, which has 220 learners, said her school was trying to save water. “The school has been educating the learners. They use basins for washing of hands, with the water being changed at intervals. The used water is then used to irrigate the school garden.”

“For drinking purposes, every class has its own bucket and a cup is used to ensure no drop goes to waste.”