Is it wise to restart school on Monday?

Western Cape department is confident about readiness. Union says return should have been delayed. 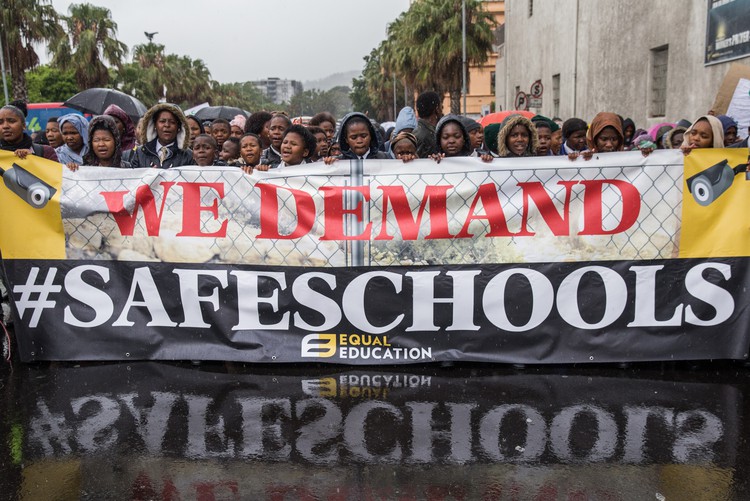 When this demonstration was held in October 2019, a very different kind of safety was at issue. Archive photo: Ashraf Hendricks

On Monday 1 June, schools across South Africa will partially reopen. However, in the Western Cape and Eastern Cape (and possibly some other provinces) each infected person is infecting more than one other person on average, which means the epidemic is still escalating. In most of Europe, China, US and many other places, schools have generally been closed at this stage of an outbreak.

On 19 May, Minister for Basic Education Angie Motshekga, said in a speech: “The forced closure of schools to slow down the spread of the coronavirus was a necessary step to take. It remains an important step that was taken to contain the virus as quickly as possible and to save lives.”

Nevertheless, Motshekga chose to reopen schools across the country from 1 June. The statement also said: “The Council of Education Ministers (CEM) … agreed that provinces must move at the same pace to ensure that nobody is left behind.”

Bronagh Hammond, Director of Communication at the WCED, told GroundUp that it was the National DBE’s decision to reopen schools across the country on 1 June. Hammond said: “However, as a Province, we have prepared accordingly in line with various Health and Safety guidelines.”

Basil Manuel, Executive Director of NAPTOSA, South Africa’s second largest teachers’ union, said that it does not make sense for schools to return in the Western or Eastern Capes, nor “does it make sense for schools in high infection areas (Hot Spots). The trajectory of infections in these areas are such that we will probably see a spike in school infections especially amongst teachers and older learners.”

Manuel said that NAPTOSA had proposed that schools in high infection rate areas return a few weeks later than the rest of the country.

In response to GroundUp’s questions on the provision of personal protective equipment (PPE), Hammond said: “The WCED has over the course of the past two weeks delivered various PPE to schools. These include sanitisers, cleaning materials, liquid soap, masks, thermometers.

“The deliveries were to accommodate the return of teachers with more deliveries taking place currently for learners. We are following up on singular schools where they have reported to have not received certain PPE.”

On the state of re-supplying PPE, Hammond said that the “WCED is supplying some PPE in tranches”.

As regards the provision of PPE to schools, Manuel said that much had been done, but said “members are reporting serious problems” in the Northern Cape, Free State, KwaZulu-Natal, Eastern Cape, and Mpumalanga. In the Western Cape, schools in the Southern Cape region were struggling with provision of PPE, while in Gauteng, Soweto in particular was not ready”.

Manuel said that there were PPE resupply plans, but he cautioned: “History however reminds us of the poor record that the DBE has with deliveries … In addition Education was not a beneficiary of the R500 billion set aside for Covid-19. So we are bound to hear that there are no supplies delivered. This sets us on a collision path.”

When asked what the department’s recommendations are for schools that are overcrowded and unable to implement physical distancing measures, Hammond said: “The WCED has asked schools to submit plans on how they will accommodate learners and to also indicate when they feel that social distancing will be compromised.”

Hammond said that the recommendations to schools when learners or teachers test positive can be found in WCED Guideline L: Managing Covid-19 cases in schools, which contains guidelines on cleaning, as well as what to do when there is a positive case or if someone has been in contact with a positive case of Covid-19.

“If there has been a confirmed case of Covid-19 then the school is required to contact the district for assistance in terms of further cleaning. In all other cases, schools should follow the guidelines and protocols for cleaning as provided.”

GroundUp has become aware that dozens of teachers who fear they are at high risk are willing to resign but have a 90-day resignation clause in their contracts which prevents them from doing so immediately. We asked the department whether they would compel teachers who believe they are at high-risk to return to school even if they’re willing to forsake further salary payments.

Hammond was not aware of specific regulations on this matter and said, “The issue of teachers with co-morbidities has not yet been finalised. We are waiting for further clarity from DBE. In the meantime, we have requested that teachers with co-morbidities submit an application for a concession to their principals accompanied with a full medical history report from their medical practitioner, as well as a plan as to how they would propose that they might continue to work from home.”

Manuel told GroundUp that the 90-day resignation clause had never been strictly adhered to, but that teachers who refused to return would not be protected by labour law and could lose their jobs (by being dismissed as opposed to having their resignations accepted).