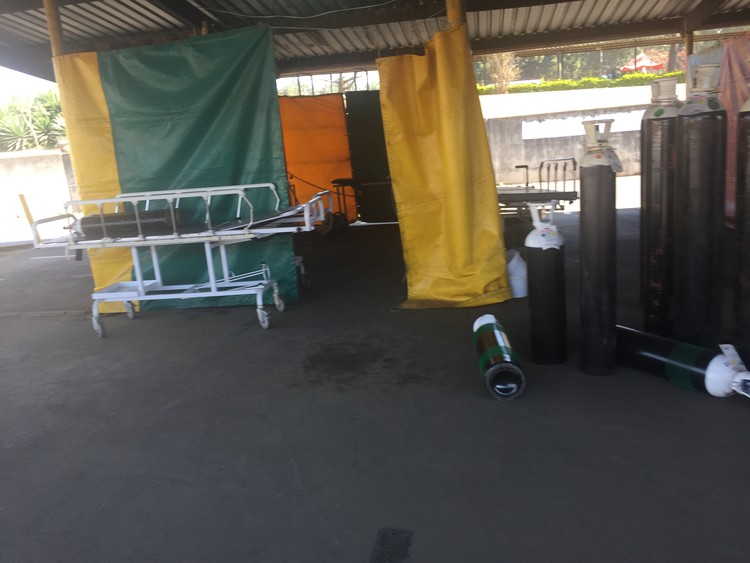 This is one of the treatment areas where patients slept at the Covid-19 tent at Northdale hospital in Pietermaritzburg. Photo: Nompendulo Ngubane

Ntombenhle Mkhize, 54, was diagnosed with bronchopneumonia the day before she died in the icy cold “makeshift” Covid-19 facility at Northdale hospital in Pietermaritzburg.

Mkhize’s son, who asked that his name be withheld, said they took his mother to hospital at 2pm and were informed the next morning of her death.

“She phoned us around 11pm and said she was still waiting and feeling cold. At 3am she called again and begged that we bring her a blanket. We managed to get a car at 4am and took the blanket to her … It may have been time for my mother to go, but the cold in that tent finished her. You cannot keep a sick person in such conditions,” said Mkhize’s son.

The Northdale facility, where suspected Covid-19 patients are held, has made headlines this week for its “substandard conditions” and raised questions about the province’s ability to safely test and treat people.

The facility is a wide, mostly yellow, red and green tent in a parking lot inside the hospital grounds. It has chairs, beds and oxygen cylinders. Patients have no easy access to toilets or water while they are waiting to be helped.

Hlengiwe Khumalo’s father, Sibusiso Khumalo, 67, also died from hypoxia while waiting in the tent last Friday after he complained of chest pains.

“Around 7pm my brother and sister took him to hospital. My brother put him in a wheelchair since he was unable to walk. The security guards told them to go inside the tent. My father had to wait with other patients who were already there. There is nothing warm in there. It’s only the beds,” said Hlengiwe.

“My sister went home and fetched him a blanket. He was still waiting in the tent. Later, the nurses advised my sister to go home and leave my father in their care. That was after 11pm. Around 2am my father passed on,” said Hlengiwe.

On Wednesday, the KZN Department of Health issued a statement that MEC Nomagugu Simelane-Zulu announced the immediate suspension of the medical manager and nursing manager at Northdale Hospital. Simelane-Zulu also redeployed the acting CEO, who has been on sick leave for more than two weeks, to her original position as a maternal health specialist.

According to the statement, the precautionary suspensions are to allow for an investigation into the death of Khumalo’s father, Sibusiso Khumalo, in the early hours of Saturday morning. The MEC also instructed head of department Dr. Sandile Tshabalala to get an independent investigative team to probe the incident.

“The investigative team, from the University of KwaZulu-Natal, has already begun its work, and is expected to produce a report by Friday and make recommendations,” read the statement.

It is understood that another temporary structure with adequate heating will be erected at the hospital by Thursday.

Speaking at Northdale Hospital on Tuesday, MEC Simelane-Zulu said: “We have more than 70 hospitals. All of them were given a directive to establish flu clinics to help screen patients for Covid-19… The problem at Northdale is that you have people who are employed to do a job, but they do not.

“They wait for others higher up to do their work. You get to the facility and find that management does not see anything wrong with having a tent with open spaces at the top, which lets in air.”

The Department will announce findings of the investigation soon.