Inside Braamfontein’s place of refuge

The clinic inside the church that Father Pugin protected 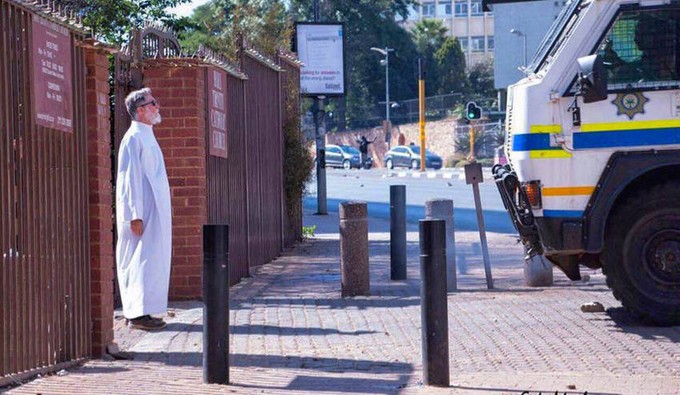 Father Graham Pugin stands in front of a Nyala to protect access to the Holy Trinity Church in Braamfontein. Photo: Edward Molopi

On Monday Father Graham Pugin of Holy Trinity Church in Braamfontein was shot in the face by police during the student protests. While receiving care he called on students to respond peacefully to his attack. Twelve years earlier he had agreed to the pleas of medical students to establish a clinic for the homeless within the church. This is a snapshot of the Trinity Clinic for the homeless, written just before this week’s events.

It is a Tuesday evening, and a slow queue is forming outside the makeshift clinic run out of the Holy Trinity Catholic Church in Braamfontein, Johannesburg. Greetings are exchanged between the mainly male homeless individuals who come for the soup, soap and medical check-up at the church. This clinic, run by Wits University medical students, takes place fortnightly to provide patients with primary health care checkups, examinations and diagnostics.

Solomon Sibanda, a homeless electrical engineer from Zimbabwe, is one of the patients this week. Lifting his hat, he points out a swollen cheekbone, and some fresh scabs above his lip. “I was a Debonairs delivery guy,” he explains. “When I was in an accident on my motorbike about two weeks ago, the hospital sent me away. They said they do not help foreigners.” At the so-called Trinity Clinic, Solomon was given a neckbrace and pain tablets. “They treat us like private patients here,” he says.

The clinic was started in 2004 by students Bronwyn Weber and Michael Flynn. Living in the Trinity student residence, Weber decided to reach out to the church for collaboration after identifying a growing need for healthcare for homeless individuals living in Johannesburg’s inner city. “I wanted to be able to volunteer, gain experience and offer my services particularly in my field of study and interest,” says Weber, now an emergency unit doctor in Cape Town. “Holy Trinity Catholic Church ran a soup kitchen every Monday evening. Students were encouraged to volunteer and assist at the soup kitchen, but I soon realised that many of the homeless from the inner city who came to the soup kitchen, also presented with, usually, minor ailments, asking for very basic medications, like paracetamol for a headache, or a dressing for a wound: ailments for which they could not and would not spend hours in a queue at an already under-resourced clinic.”

The church was already seen as a site for the city’s destitute, making it a suitable location to launch the initiative. But  in 2012 the clinic had to be closed down in order to get certification to manage a small pharmacy alongside it. In time, sponsors helped the students re-opening the clinic, and once the certification was received the clinic restarted in February 2016, gaining a steady stream of student volunteers and patients.

“This is a place of learning for us,” says Alyssa Kaplan, a fourth year medical student, who is taking down a patient’s medical history. “We get to engage with students from other years, senior doctors, and most importantly, the patients. At the heart of medicine is the relationship between the doctor and the patient. Spending time here gives students the chance to learn that being a good doctor goes beyond textbooks and lecture theatres.”

Inside one of the small examination rooms, a man who identified himself only as Fredericks sits gingerly on a chair in the corner of the room. Fredericks moved from Khayelitsha to Johannesburg in 1995 seeking work.

“I have a bad ulcer,” he explains, “but I am taking Disprin every day for the pain.” A senior doctor in the room looks alarmed. “Fredericks, the first thing you need to do is stop taking the Disprin,” the doctor says. “That will only make it worse. What about cigarettes? And drugs?”

“I am smoking, maybe 40-50 cigarettes a day,” Fredericks responds openly, before covering his mouth and laughing nervously. “I am also taking coke and nyaope.”

At the end of Fredericks’ consultation he is given guidelines on how to monitor his ulcer. He is also encouraged to take an HIV test. “In an ideal world, he would be admitted tomorrow,” says the senior doctor, acknowledging the limitations of the volunteer-run organisation and the difficulties of receiving treatment at a government hospital. Despite Fredericks’ willingness to be tested for HIV, the clinic cannot yet afford multiple testing kits, nor does it have counsellors to talk to patients before and after the tests.

The need for a clinic such as Trinity reflects a lack of primary healthcare clinics to lessen the bottleneck of patients waiting both for diagnosis and for treatment at under-staffed and under-resourced national hospitals. In November 2014, President Jacob Zuma launched Operation Phakisa 2: a government programme aimed at prioritising 3,500 primary healthcare facilities. While Trinity, and other clinics like it, provide much needed support for the healthcare system in Johannesburg, the volunteers and doctors speak about the need for more widespread formalised primary healthcare clinics in the country. “It would be great if the Department of Health mandated some existing established clinics to remain open after hours to allow for patients to attend when convenient,” says Argentina Ingratta, a physician at Helen Joseph Hospital and one of the senior doctors who regularly mentor the students at the clinic. “This would be especially valuable for those with piece jobs who can only visit the clinic after six in the evening.”

Until then, volunteer medical staff, such as Ingratta, believe that the clinic should be a formal part of university training. “Students manage a patient from start to finish. This is great practice for their future roles as interns,” she says. She believes that formalising the Trinity Clinic in the student’s training could provide a steady stream of volunteers who would gain from putting their studies into practice.

Though the volunteers work as swiftly as they can while still giving the patients adequate attention, some of the patients will not make the shelters that close their doors by 8PM: a choice they must make between medical care and a bed to sleep in. Only a trickle of patients remain. Fredericks now has the correct pain medication for his ulcer from the makeshift pharmacy. “When you are sitting on the street the world undermines you,” he says. “But the doctors here make me feel better.” He nods a goodbye to the medical students before walking towards the church gate and onto the streets of Jozi once more.

Note: the church has since been used as a makeshift trauma unit for those injured during the student protests.