Inquiry hears why violence broke out at Charlotte Maxeke Hospital

Department says it has no money to pay workers’ performance bonuses 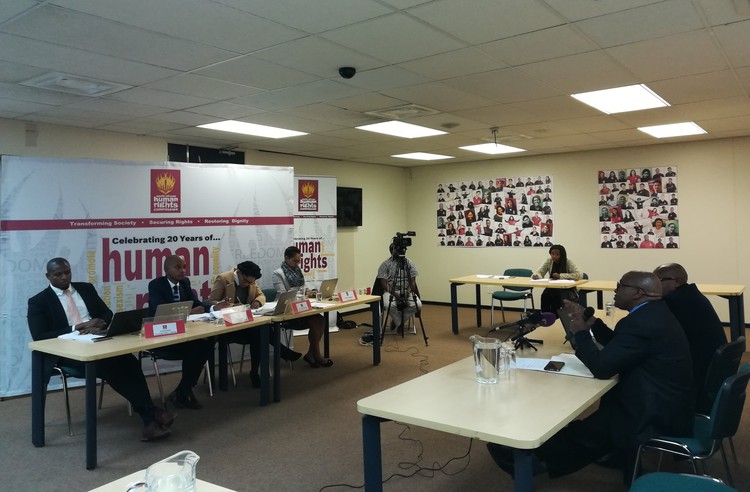 The protest by health workers over unpaid performance bonuses at Charlotte Maxeke Academic Hospital in May was unexpected. This was according to Chief Executive Officer of the Hospital Dr Gladys Bogoshi and Head of the Gauteng Health Department Dr Mkhululi Lukhele.

This was heard at a South African Human Rights Commision inquiry into the causes of the protest and ways to prevent it from happening again. The one-day inquiry took place in Braamfontein on Thursday.

On 31 May hundreds of workers, mostly National Education, Health and Allied Workers’ Union (NEHAWU) members, demanded that the Gauteng Health Department pay their performance bonuses for the 2016/17 financial year. The workers blocked the entrances to the hospital with garbage, dustbins and rocks. The corridors inside the hospital were filled with rubbish including papers and half-eaten food. Hospital operations were disrupted and some patients were sent home.

But NEHAWU Provincial Deputy Secretary Gracia Rikhotso and Provincial Chairperson Lulamile Sibanda said they repeatedly warned the health department that their members were becoming impatient. Rikhotso said the department continued to “negotiate in bad faith” by sending inadequate responses to the workers’ memorandum and “making empty promises of payment” to the workers. She said the negotiations lasted about 14 months.

“We unequivocally condemn the actions that lead to the disruptions of the hospital without justifying it in any way. But the Department cannot say they didn’t see it coming after workers were picketing almost every day from 9 April,” Rikhotso said.

She said performance bonuses were part of a policy that was negotiated long before the protest “so workers shouldn’t be begging and negotiating for something they rightfully deserve”. Sibanda said the protest could have been avoided had the department responded to the workers’ demands immediately.

Lukhele said the Department could not afford to pay bonuses because it was “underfunded to begin with”. He said the bonuses would amount to about R350 million and the hospital needed that money to buy machines, masks and other equipment.

“I understand the need for public sector health workers to be incentivised, that’s why I kept taking the proposal back to Ex-Co [Executive Committee] for review,” Lukhele told the panel. He said the Ex-Co did not approve the payment of bonuses because there was no room for it in the budget.

“The anger about not being paid was expected. But the inhumane way in which the protesters expressed their discomfort was not expected at all,” said Lukhele.

Bogoshi said protesters were throwing clean linen on the floor, burning old chairs and mattresses on 31 May. “They even went into theatres, which are sterile areas, while people were on the operating table and took anything they could find. I got calls from surgeons asking whether they should continue with the operations,” she said.

“Some nurses locked themselves and the patients in the toilets because they were scared…in all my years in the health sector I have never seen nurses and doctors being stopped from doing their jobs.”

Bogoshi said the damages to the hospital amounted to about R3 million.

The chairperson of the inquiry, Buang Jones, asked Bogoshi where the money to fix the damages came from and how it would affect the running of the hospital.

“It came from the very same money we were supposed to use for goods and services for the Hospital … I really don’t know. We’ll have to sit and see what we can do. For example, some operations will have to be postponed because we don’t have money for equipment,” Bogoshi responded.