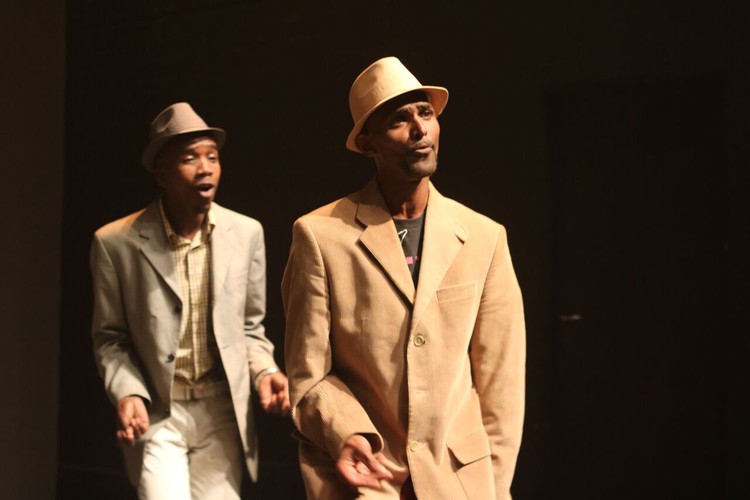 The Making of a Criminal Part 2 is showing at Artscape until 30 September. Photo: Belinda Bowling

“People don’t want to work with perpetrators … Nobody wants to go there,” said Jacquline Hoorn, a social worker at NICRO. She was speaking at the premiere of Making a Criminal Part 2 at the Artscape Theatre on Thursday evening.

NICRO, a non-profit organisation, runs the “Help I’m Free” outreach programme at correctional service facilities around Cape Town. The programme, which works with current prisoners and released offenders, aims to help them with integration into society through using the arts.

For a second year the programme worked with Pollsmoor Correctional Services from March to September to create a theatre production with offenders, culminating in a performance run at the Artscape Arena Theatre.

The first piece, directed by Yasin Gyltepe, is about two rival gangs and a love affair across gang loyalties. Gyltepe says using the techniques of theatre is “where we start working with their minds”. “We ask them to do tough things like revisit certain experiences. [I would say to the prisoners] ‘I want you to tell me why you did it but I don’t want to hear you say it, I want to see it in your body’”, he explains. “For me, it’s night and day from who we met [the inmates] in February until now.”

The second half, directed by Chiminae Ball, focuses on the challenges offenders face after prison and is based on their personal experiences – the difficulties in getting a job, of socialising with their family and friends, and resisting the temptation to go back to violence and crime.

“In those workshop processes we tried to give them something creative to do, and to think through what happened in their week, because for most of them they’re a couple of months out of prison and there’s a lot of new information coming their way,” says Ball.

“I’ve seen them start to ask more questions about each other which never really happened before,” she says.

After the performance there was a question and answer session. Members of the audience thanked the actors and congratulated them for choosing to be a part of the programme. One audience member said, “It’s up to us as a society to bring our support. Correction is a societal responsibility and we need to assist where we can”.

A member of the audience asked about the impact the programme had on the prisoners. Simon Render, who performed in the first production, responded by saying, “Walking the road over a year, it’s been amazing to see the growth and confidence in people and in myself as well. You see the change in the tiny things, like how you respond to people, how you socialise with people, even inside [prison]”.