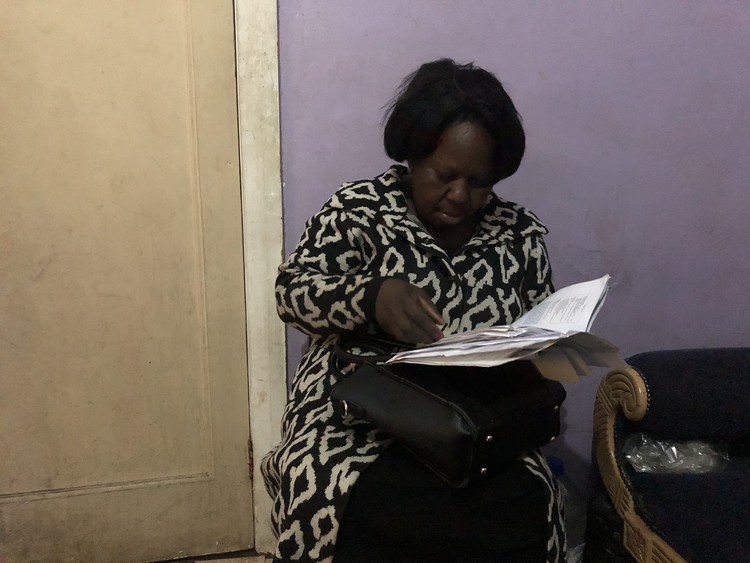 Kundji Tembo goes through her hospital and Home Affairs documents in a room she is sharing with her daughter and two other family members. Photo: Tariro Washinyira

The Cape Town Temporary Refugee Facility on the Foreshore does not cater for people who are ill, according to a 60-year-old asylum seeker.

Kundji Julienne Tembo was travelling on a train in 2013 when it caught fire. She had to jump off her carriage to save her life. She injured her leg. She had to have knee surgery twice. But her knee continues to give her problems. Little did she know at the time that for years to come her difficulties with walking would make it so hard for her to renew her asylum papers.

Sometimes her leg swells up and it’s impossible for her to walk, like on 9 April 2015. That day she had to miss an interview with Home Affairs to renew her papers. For missing the interview she was fined R1,500. What’s worse is that she has not been able to renew her papers since. Each year that her asylum papers are not renewed incurs a fine of R1,500. She currently owes Home Affairs R4,500.

Despite her painful leg, Tembo has made many attempts to get her documentation sorted out at the Foreshore centre, but she never gets properly served. She has returned as early as 6am numerous times without success. She is unable to stand for a long time and so sometimes has to give up waiting: there is nowhere for her to sit while waiting in the long queues outside. But sometimes she has to give up simply because, she says, Home Affairs officials are rude and unhelpful.

“Officials don’t listen to the reasons for coming late to renew. For instance, in my case I do have proof that I was hospitalised twice but I was never given a chance to explain,” she said.

GroundUp has reported on poor management and ill treatment of refugees at the Foreshore offices. Most recently we reported how three Zimbabwean children missed their examinations because Home Affairs officials at Cape Town refused to consider the family’s circumstances.

Tembo came to South Africa from the DRC in 2011. “Ever since Joseph Kabila came to power, there has been no peace in the area I come from. Daily I receive videos from my family of people being killed,” she says.

Tembo says that she has made many failed attempts to renew her document. In her latest effort, on 10 June, she says she managed to interact with an official but upon seeing that her document is long expired, he refused to renew it. He said Tembo should first pay fine. When she tried to show the official documentation proving she had been in hospital and that explained why she did not renew on time, the official, according to Tembo, said, “Just go and pay the money or get a lawyer.”

But she can’t afford the cumulative fines nor her lawyer — Tembo is unemployed and depends on her daughter, who is a cashier, to support her — and her efforts to get the fines waived or reduced have been in vain.

Tendai Bhiza of People Against Suppression Suffering and Poverty (PASSOP) is now trying to assist Tembo. Bhiza explains that Home Affairs can issue fines for late renewal, but since Tembo is able to prove that she has been hospitalised and has difficulty walking Home Affairs should have been willing to assist her. Bhiza says it’s partly Home Affairs’ fault that she has not been able to renew her document for three years.

Bhiza explains, “As an activist and as assertive as I am, whenever I think of going to Home Affairs I often get a headache … I’m even dreading going there next week to renew my ID and travelling document. They know that they don’t open on weekends but they still gave me Saturday as a renewal date. I lost a lifetime opportunity this year when I failed to get a copy of my refugee status though I visited the offices daily for two solid weeks,” Bhiza said.

If it’s this hard for Bhiza, who understands the system and is willing to push back against it, it’s much harder for most other people, especially someone like Tembo with her health problem.

Thabo Mokgola of Home Affairs said Tembo should write to the Director-General with proof of her condition and apply for a waiver.