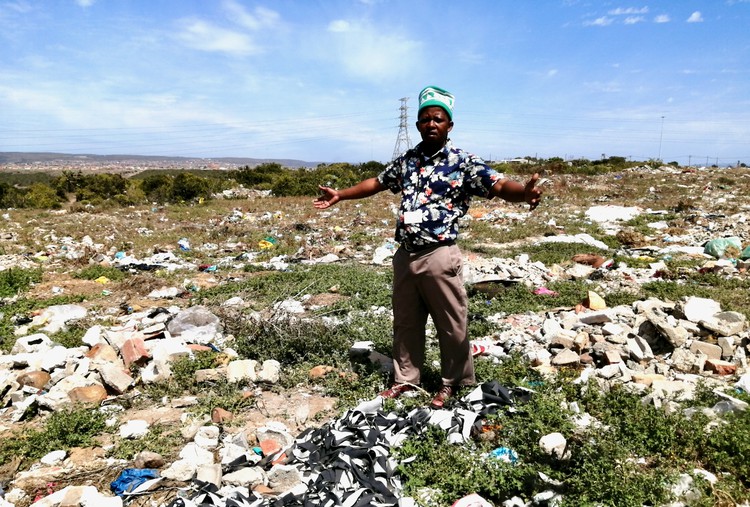 The summer initiation season for Xhosa males has started, but in Govan Mbeki, Port Elizabeth, Nyameko Jacobs says he is frustrated by the filth around his Zinyoka Initiation School.

Located on Old Uitenhage Road, the school proudly claims to have had no fatalities in the past 25 years. Instead, its reputation is threatened by illegal dumping.

Trucks and bakkies from construction and waste companies have been dumping their loads, leaving piles of garbage, rubble, tree branches and car tyres blocking the roads to the initiation school. There is no longer easy access for emergency vehicles or traditional doctors and nurses.

Jacobs, an ikhankatha (traditional nurse) says, “This is disgusting … As ikhankatha my job is to heal, and hygiene is very important. But how am I going to heal my initiates in a filthy and dirty place like this?”

“The whole place stinks. Bakkies and trucks come and dump dead dogs here; some are even carrying used nappies.”

“Families of the initiates are forced to leave their cars next to Old Uitenhage Road … It is even hard to walk through on foot.”

Jacobs said, “On 17 October during our meeting with the municipal officials at Nangoza Jebe Hall in New Brighton we raised this problem. The officials promised to attend to it immediately. But nothing has been done.”

A truck driver, who spoke on condition of anonymity, said, “Arlington dumping site in Walmer and Kodoeskloof in Uitenhage are too far … We are self-employed and dumping in open spaces saves us a lot of money.”

George Geleba, spokesperson for the mayor of Nelson Mandela Bay, said, “The municipality respects diversity in the City and the culture of ulwaluko (circumcision), and illegal dumping should not hinder the process of circumcision the boys have to undergo.”

“The municipality continues to encourage community leaders to approach us with proposals so that we can evaluate whether pieces of land are available. We also urge residents of Govan Mbeki to report illegal dumping to the authorities.”