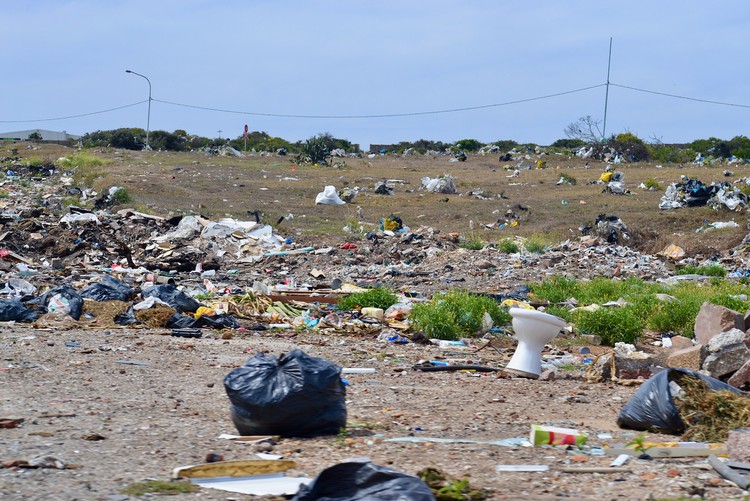 The filthy site where a nearby initiation school is meant to operate in New Brighton. Photo: Thamsanqa Mbovane

“We will again achieve a zero death rate of initiates. We attribute our success to being strict and our surgeons and nurses always adhere to that,” Fikile Desi, deputy secretary of the Nelson Mandela Bay Initiation Forum, told GroundUp.

About 50 traditional surgeons and traditional nurses gathered at Daku Hall in Port Elizabeth on Wednesday afternoon to launch the initiation season. Representatives of the amaHlubi, amaXhosa and abeSotho attended.

Since 2016, Nelson Mandela Bay has claimed to have no deaths during initiation.

Zandisile Magxwalisa, from the Department of Social Development, also attending, cautioned that under-age boys, who wanted desperately to be men, sometimes used their siblings’ IDs.

“They steal their bigger brothers’ IDs … When a boy who does that dies in the bush, automatically his bigger brother also dies because Home Affairs declares him dead, due to his ID being used fraudulently by the deceased,” he said. “Please let us be extra careful … scrutinise IDs because we have had many such reports.”

Pula Lunake, chairperson of the forum, voiced concern over the state of schools in New Brighton, eZinyoka and Motherwell, which are plagued by litter and rubbish. He criticised the municipality for not cleaning up.

“We also didn’t get a commitment from the municipality regarding the delivery of water to the traditional schools,” he said.

Ingcibi (traditional surgeon) Nyanisile Isaac, from Motherwell, said, “The bush is dirty in Motherwell where I operate … The problem is with the municipality. They said in a meeting they did clean the Motherwell initiation school, but we asked where and they failed to tell us.”

Isaac said the zero death rate could also be attributed to the schools having kept women away from the ceremony, as traditional belief holds. “However, some women are causing us headaches by offering to cook through their catering companies for the initiates … A person who is supposed to cook for an initiate is an old female family member and the food must be delivered by a boy who is about 10 years old.”

Mayoral spokesperson George Geleba said, “The municipality respects diversity in the city and the culture of ulwaluko (circumcision) … We continue to appeal to community leaders and residents to help us combat illegal dumping.”