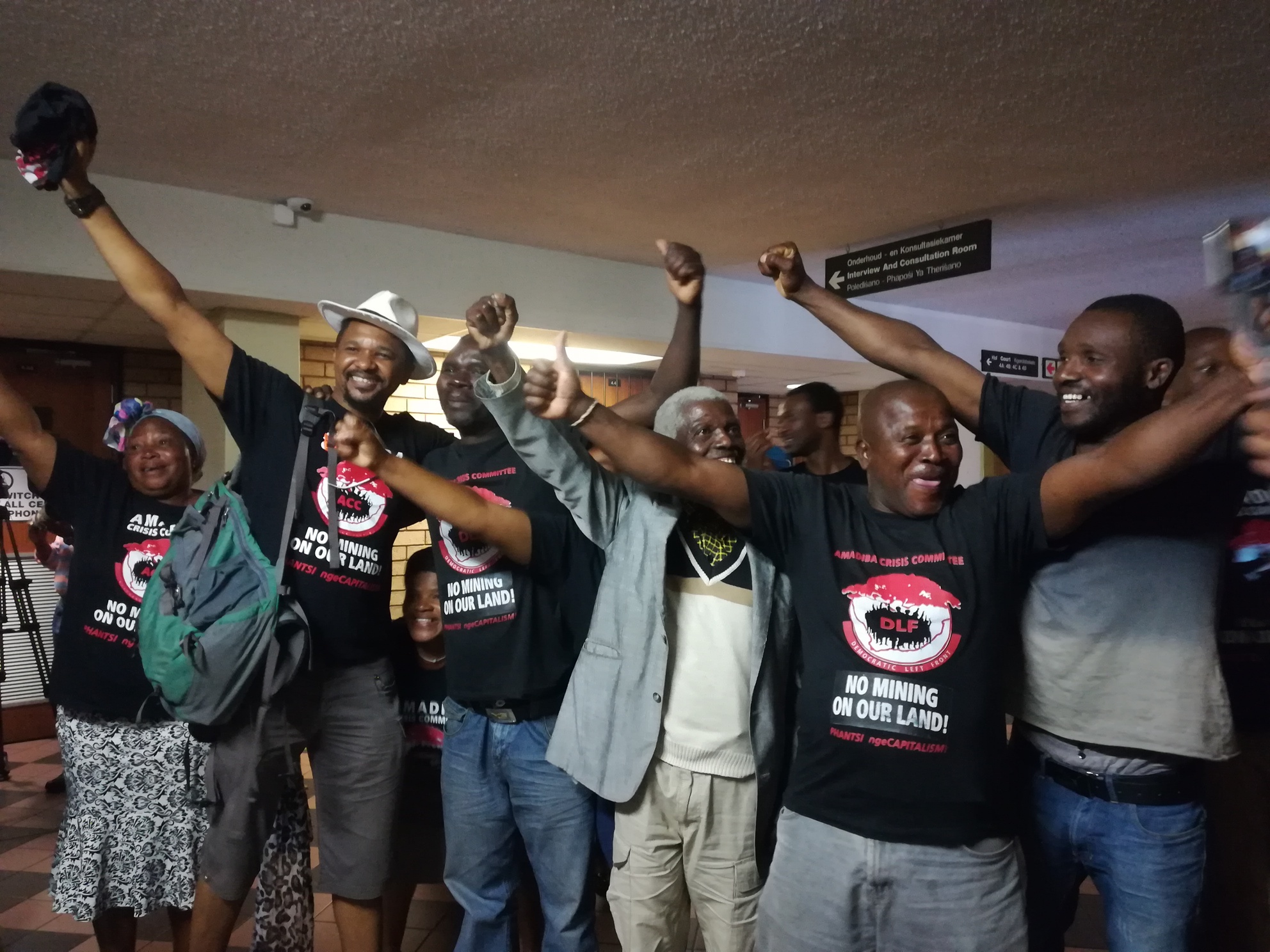 Xolobeni community members celebrated at the North Gauteng High Court in November 2018 after Judge Annali Basson ruled that the Department of Mineral Resources has to obtain consent from communities before granting a mining right to a company. Archie photo: Zoë Postman

Mining rights applications should be public documents, the Amadiba Crisis Committee (ACC) and the Centre for Applied Studies (CALS) argued in the North Gauteng High Court on Monday.

The Amadiba Crisis Committee was representing the leaders of the Umgungundlovu community, where Australian mining company MRC, has applied to mine titanium in Xolobeni, a village in the Eastern Cape, through its subsidiary Transworld Energy and Minerals (TEM).

Judge Tintswalo Nana Makhubele was presiding over the hearing.

According to CALS, in 2015 the Umgungundlovu community had to approach the North Gauteng High Court using the Promotion of Access to Information Act to get information about the mining rights application in their area.

Now the community leaders are back in court asking for a declaratory order so that other communities are given the same access to information about mining operations that may impact them.

Advocate Emma Webber, representing ACC, argued that in order for communities to access their right to consultation and consent, they need access to information about the impact of the mine on their livelihood, water, land and labour recruitment.

She said the declaratory order which ACC and CALS sought would be in the interest of justice because it would give effect to the community’s right to meaningful consultation. It would also be in the interest of convenience because the issue would come up again if no declaratory order was made, which would mean the parties would have to come back to court to litigate. This would drain the time and resources of the community and the court, argued Webber.

But Advocate Peter Lazarus, representing TEM, said the fact that communities had the right to access the mining application was not in dispute. He said the sole dispute in the case was how the communities should access the information. He argued that the mechanisms provided for in PAIA were sufficient.

Referring specifically to the ACC and Umgungundlovu community, Lazarus said there was no “live dispute” between the ACC and TEM because the committee already had all the documents it requested from the company in 2015.

He accused the applicants of litigating in a “reckless, frivolous and unreasonable way” and said the issue had become “academic” rather than practical.

But Judge Makhubele interjected saying: “They [the Umgungundlovu community] had a happy ending on this particular issue … but the issue is broader than that. Communities should not have to rely on the goodwill of the mining company.”

Webber said the PAIA process was often slow and laborious, which sometimes hindered the community’s right to meaningful consultation.

Referring to CALS’s submissions on the Department of Mineral Resources (DMR) slow rate of processing PAIA applications, Webber said it was proof that communities often struggle to get access to documents in time. But Lazarus said this was a bureaucratic issue within the DMR that should not be fixed with a declaratory order.