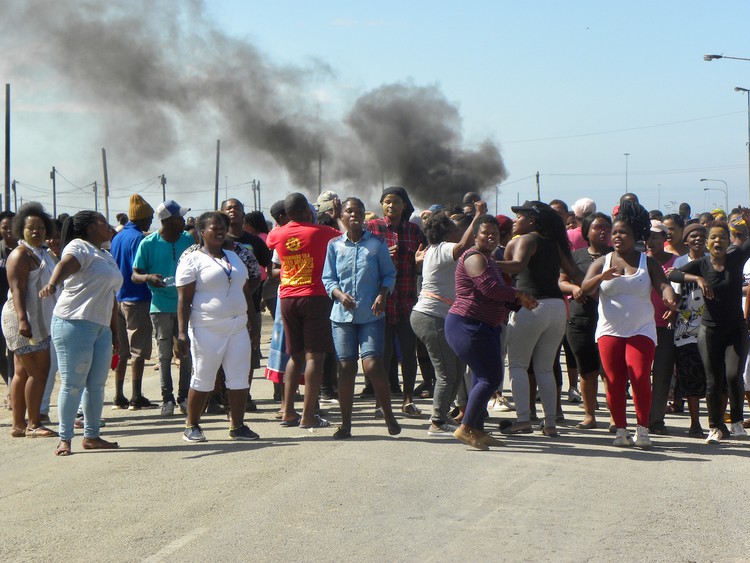 The demonstrators came from various informal settlements including two in Wells Estate, from Asinavalo and Nomakanjani in Ikamvelihle, from Powerline and Tyoksville in Motherwell and Khayelitsha in Shukushukuma.

Andile Speelman, spokesperson for residents of Nomakanjani, said, “We are fed up with the municipality’s lies to us. They put electricity poles up long ago, only to abandon the project in October last year. They told us there was no money.”

Speelman said Mayco Member for Infrastructure and Engineering Andile Lungisa promised that an adjustment budget would be passed on 27 February.

“After 27 February they told us the budget had been approved and they requested a further two weeks to implement the project. They have not come back to report to us,” said Speelman.

Speelman said they had heard that as there is currently no executive mayor in the metro, agreements are not signed. He said, “This is the reason we are calling the reinstatement of former Mayor Mongameli Bobani.”

He said there were only five toilets in Nomakanjani settlement for 3,000 people.

Monwabisi Yane, a community leader for Powerline, said there are more than 1,500 shacks in the settlement and no toilets and no water taps. “We know it is illegal to live under electricity pylons but this shows how desperate we are … We travel long distances to fetch water from other informal settlements. We want to be moved from here to a better place.”

Protesters vowed to continue with protest action until the municipality addresses them.

Lungisa told Groundup: “I have begun a process of addressing the protesters from ward to ward and I hope to achieve positive results with them.”

Police spokesperson Captain Andre Beetge confirmed that two trucks were burnt on Thursday night, one on the N2, another at the junction of M17 and R335. The N2 reopened but the M17 is barricaded by an informal settlement from Wells Estate.

“Motorists are urged to make use of alternative routes past Motherwell due to protests and throwing of stones at vehicles,” said Beetge.