“Overwhelming evidence that some migrants do not possess paperwork because of corruption, maladministration and bureaucratic hurdles” at Home Affairs, says protest leader 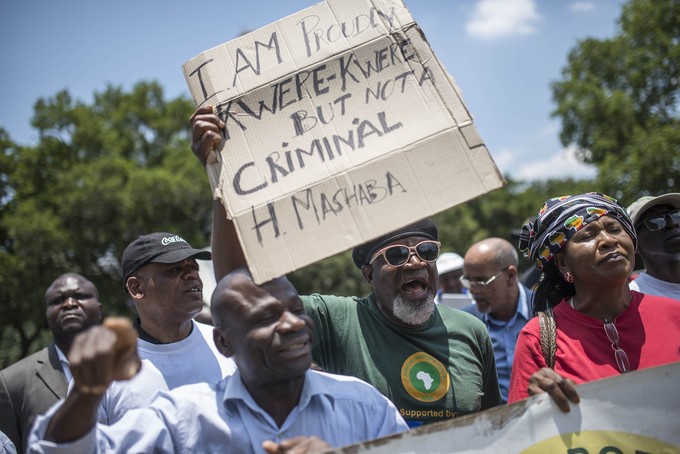 About 50 people led by the Africa Diaspora Forum (ADF) picketed outside the offices of Johannesburg Mayor Herman Mashaba on Monday. This follows comments by the mayor linking undocumented immigrants and criminality in the city.

The protesters were concerned that Mashaba’s comments could endanger immigrants in the city especially given the outbreaks of violence that have taken in place in the past decade.

A large contingent of metro police watched over the protesters as they called for the mayor to come down and accept their memorandum.

Marc Gbaffou, chairperson of the ADF, accused politicians of using immigrants as a scapegoat for failing to deal with the challenges facing the country. He said that the high level of undocumented immigrants is also due to the delays and difficulties that immigrants experience at Home Affairs. “There is overwhelming evidence that some migrants do not possess appropriate paperwork because of corruption, maladministration and bureaucratic hurdles they encounter as they attempt to legalise their stay in South Africa, “ said Gbaffou

A protester who did not want to be named said that he was upset that the mayor went to the various embassies of foreign nationals living in South Africa. He said refugees and asylum seekers had fled tyrannical governments to seek safety in South Africa. In his view, for the mayor to meet with the representatives of those embassies was to put their lives at risk as they have come to South Africa to hide from those very people due to their differing political views.

The mayor did not come down to receive the memorandum but it was received by a representative from his office.

Gbaffou called for the mayor to retract his statements. He also pleaded for engagement between those in power and organisations like the African Diaspora Forum so that a spirit of mutual understanding between the parties could be cultivated.

“In any society you will have bad and good people. You might have a few migrants who are getting themselves into criminal activities. We are encouraging the mayor to arrest them and put them in jail. However not all migrants are criminals. Crime has no nationality. We are calling on the mayor not to stereotype,” said Gbaffou as he addressed the crowd. “Migrants can contribute positively to the economic growth of the city and of South Africa as well. They want to be part of the processes that benefit the city and South Africa. It would be foolhardy for the mayor’s office to appear to be dismissing them all as criminals.”