Immigrants and South Africans march together in Hillbrow 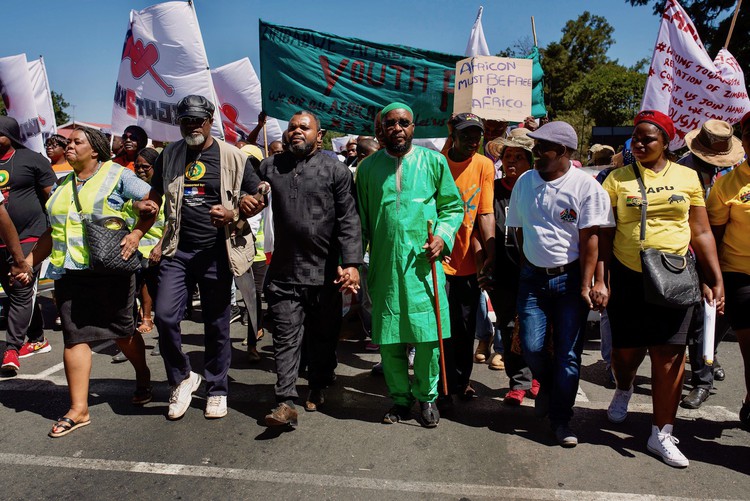 On Tuesday, hundreds of people from Johannesburg’s immigrant community were joined by South African civil society organisations in a march against xenophobia.

Organised by the African Diaspora Forum, the march was to bring South African and immigrant communities together and promote unity.

Chairperson Marc Gbaffou said: “We want to use this opportunity to say no to xenophobia, but also to encourage the government to assist migrants in obtaining the correct permits.”

He expressed concern about the government’s new White Paper on immigration. “This paper is asking people with asylum permits not to work or study or open a business. This kind of law could encourage people to become criminals,” he said.

The mood of the march was jovial. People beat djembe drums and sang songs. Leaders of various communities held hands as they led the march through the streets of Hillbrow, which is home to a large immigrant community. People cheered from balconies and shop entrances. Police provided an escort. No incidents related to the march were reported.

A group of young South African marchers said a sluggish economy, corruption and unbridled capitalism lay behind rising xenophobia. They said they hoped government could do something about the high unemployment rate amongst the youth.

The march ended at the Library Gardens, where leaders from various communities took to the stage. Most were critical of current Mayor Herman Mashaba. Many in the immigrant community blame him for the recent re-emergence of xenophobic tensions.

Several leaders also took the time to criticise the state of the leadership in their home countries.

Zimbabwean Nicholas Mabena said, “We must also condemn dictatorship in our countries of origin. We must condemn them for the suffering of the poor and working class in Zimbabwe and other African countries. These poor leaders are the reason most of us have to migrate to South Africa and other places around the world.”

Gauteng Premier David Makhura made an appearance at the final rally. “The whole world is grappling with migration issues, but we can’t allow mobilisation against foreign nationals. We have a beautiful constitution that was fought for by people like our father who passed away this morning, Ahmed Kathrada. He took a very strong stance against racism and xenophobia, and I know that if he was still around and healthy he would have been part of this march. We can’t allow any space for racism and xenophobia in our society.”