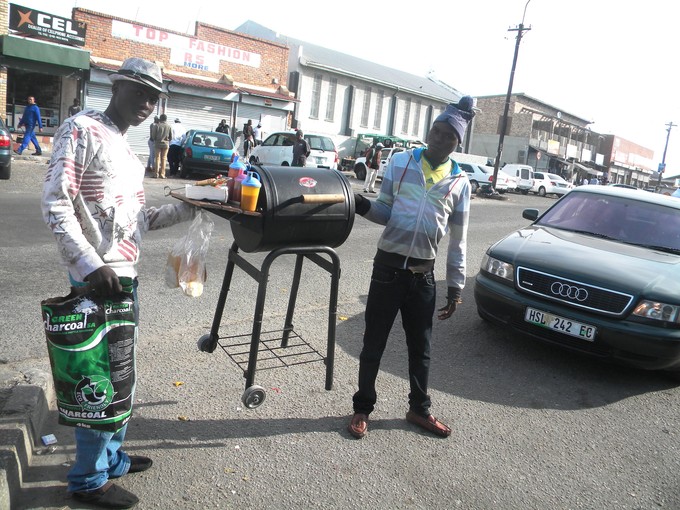 Ishmael Majidu and a friend carrying his braai stand away after being chased by local traders from his usual spot at the Kostern taxi rank, Durban Street, Port Elizabeth. Photo: Joseph Chirume

In Korsten, Port Elizabeth, South African informal traders are at loggerheads with immigrant traders. Local traders say the immigrants sell their goods at prices that are too low. The foreign nationals say police don’t intervene to protect them, but take the side of the locals.

Ishmael Majidu, from Malawi, claims he was the first to braai and sell hot boerewors in Kostern. Later, a few Zimbabweans also started to sell boerewors and braaied mielies nearby.

They have now been chased away by a group of angry women who accused them of taking away their clients. Majidu had just bought a new braai stand worth R1,800 to boost his business.

“I started selling my boerewors in December last year,” he says. “Business was good and I was making a lot of money every day. I think these people just got jealous.”

The 24-year-old said he started offering various sauces to go with the sausage, but kept his price at R10, when others were selling for R12 and R15. He thinks this is what caused the trouble.

“Their [the local’s] food is stale and they don’t add sauces.Their food is also not covered for hygiene purposes,” he says.

“They [the locals] were very violent and shouting at us, telling us to leave their country. They even threatened to beat us up and confiscate our braai stands and stock if we did not stop trading in the area.”

Majidu said he feared for his life. “I know how violent this country is. I told them that I would move to another site but not close to them.They insisted that we should move out of Kostern outright, because we had taken their customers.”

According to Majidu, police arrived but did not help.

“The police told us to respect these women because they were South Africans.They also said I should not compete with them because they have been in this business for a long time,” said Majidu.

A Zimbabwean trader who asked not to be named said the police also verbally abused them.

“We were told by the police that this was not our country. The police said the locals could even kill us and nothing would happen to the killers. They also said no one was ever found guilty during the period of xenophobia and this could happen to us.”

A local trader said the South Africans were fed up with foreigners because they were making more money than the local traders. She refused to give her name.

“Where do they [the immigrant traders] get their stock that they sell so cheap? They even add spices and tomato sauce to their hot dogs for the same price. We told them to sell their wors for R15, but they refused … Now all our customers are running away from us to buy from these foreigners because they are cheaper. If they want to do business here they must abide by the prices we give them or they must pack and go!”

“It all started with one person,” she said. “Now every corner is occupied by people braaing their meat, forcing us out of business. We sell cold boerewors because we can not raise money for braai stands but they have the money to buy everything.”

Nelson Mandela Bay Municipal spokesperson Mthubanzi Mniki refused to comment and referred questions to the police, saying it was a criminal matter.

Police spokesperson Warrant Officer Alvin Labans said, “It is a difficult case because no one reported this. Also, people should be in a position to identify the police officers who did this.”

The immigrant traders said they had not taken down the officers’ names nor the registration number of the police vehicle.