This is extortion, say police 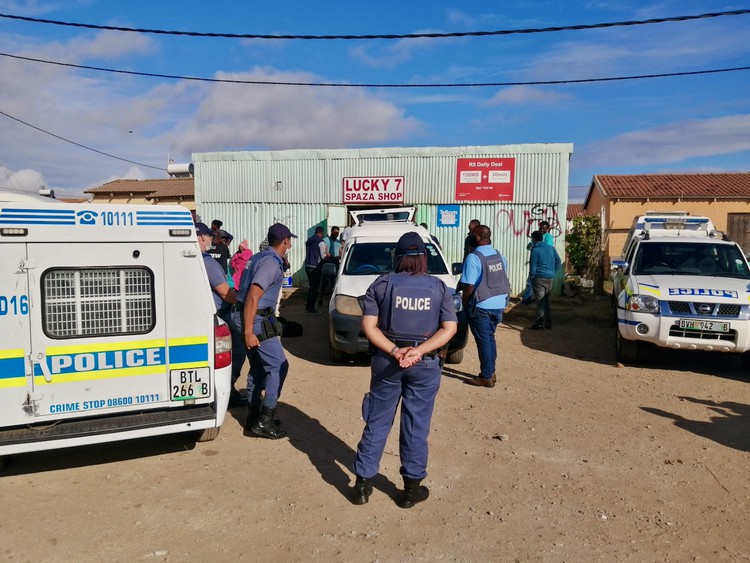 Immigrant spaza shop owners in Nelson Mandela Bay have asked the police to protect them. Archive photo of police closing spaza shops at the start of the lockdown by Mkhuseli Sizani

Immigrant owners of spaza shops in Nelson Mandela Bay are being targeted in what appears to be an extortion racket. Letters have been distributed to hundreds of spaza shop owners under the auspices of “Youth Against Crime”, asking for “donations” to protect the shops against criminals.

In one such letter, seen by GroundUp, the group say they will offer protection from crime, starting at R1,000 a month for three months “probation” and then rising to R1,200. It also “requests” that no new shops enter an area under protection. Letters have been sent asking for higher amounts. In another letter GroundUp saw the amounts were R1,300 and R1,500.

“In the northern areas, like Kleinskool and Booysens Park there are already other immigrant spaza shop owners from other countries who are paying this fee,” says Ahmed Mohamed, provincial deputy chairperson of the Somali Association Services.

“But the amount they pay, I don’t think is as big an amount as that which we are being asked to pay,” he said.

“Since February this year, we’ve been bombarded with letters at our spaza shops in Zwide, Soweto-on-Sea and New Brighton. Last month I also received a voice recorder message where a South African says he has been asked by other immigrant spaza shops owners to ask me when he can come and collect the protection fees.”

“We have asked this organisation to come after the lockdown because we want something legal that will involve the police, Community Policing Forum, councillors and community leaders … We have to think twice what would happen to our shops if we join or don’t join this partnership,” said Mohamed.

He called upon the police to protect spaza shop owners.

“We received two complaints last month in Zwide township from two immigrant spaza shop owners after they were given letters by some members of the community demanding the protection fee. But we dealt with those incidents immediately.”

Beetge said local police don’t have open investigations currently, but “in KwaZakhele and New Brighton townships, there is a strong suspicion that the payments of these protection fees are taking place.”

“The problem is that the spaza shop owners are very scared to talk. They think that these people are a large powerful group – if they report them to the police, they will come back for revenge,” he said.

Beetge advised the shop owners not to pay protection. “The police are there to protect the shops and the citizens from the criminals. All these partnerships operate in Mafia style. Once you enter them, there is no way out … If you don’t pay the fee, your shop gets robbed,” he said.

He also urged spaza shop owners to report any police asking for bribes. “Five years ago we had two police members who were asking for kickbacks every time they were doing patrols at these shops. But they were reported to us and we fired them,” said Beetge.

Thembile Makeleni, the national chairperson of Youth Against Crime, under whose name the letters are being sent, said, “This is a legitimate organisation that was formed by ex-convicts, unemployed graduates, and community members in Site C in Khayelitsha in Cape Town in 2012 after a spate of xenophobic attacks … The Ethiopian and Somali spaza owners approached us.”

“Then we decided to form this organisation to protect these shops.”

“We charge this protection fee in order to share it among ourselves because we are unemployed. But I am currently employed and I am qualified marketer. We work hand in hand with CPF [community policing forums], and community leaders,” he said.

“This is a voluntarily partnership and no one is being forced to join it,” he said.

“We have members in Johannesburg. Somali and Bangladesh immigrant spaza shop owners are making use of our services. In Eastern Cape we have partnerships in Mthatha, East London, and Komani. This was the first time moving into Port Elizabeth,” said Makeleni.