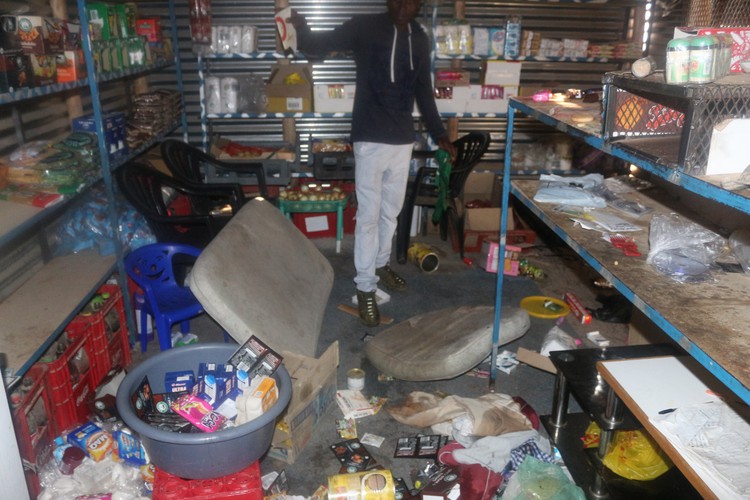 Seth Nehayo inside his brother’s shop which was looted on Tuesday. Photo: Selby Nomnganga.

A spaza shop owner from Burundi is under police protection after residents of Paballelo in Upington broke into and looted his shop in the latest round of violence against immigrant shop owners in the area.

Seth Nehayo, who came to South Africa three months ago via Zambia, runs a spaza shop in a shack in Groblershoop, about 110km from Upington. But on Tuesday he was looking after his brother’s shop in Paballello while his brother travelled to Musina in Limpopo to renew documents.

He says about 200 people came to his shop in the morning, banged on the walls and told him to leave. He locked the front door. But while he was taking a nap in the bedroom behind the shop, at about noon, he says, a smaller group of people forced their way in through the back door and looted the shop.

When GroundUp arrived at about 3pm, police were there. Station commander Lieutenant Colonel Elizabeth Bacela said Nehayo would be taken to a place of safety. The police helped to lock the back door of the shack but could not store his merchandise.

Hekima Lingini , spokesperson for about 25 Swahili-speaking spaza shop owners from Burundi, Congo, Rwanda and Tanzania spread around the townships of Upington, said a pregnant woman was hurt in Dakotaweg in looting yesterday. A man was also hurt in the looting of another spaza shop in Paballelo, he said.

Attempts to loot a shop in Bakhwethaville had not succeeded, Lingini said. About the looters, he said: “When they have problems like bad public service why do they hurt other people?”

Lindo Mbetha, convenor of the Paballelo Youth Movement, said the movement targeted drug dealers. He said: “We identify where the drugs are. We don’t encourage looting.”

He denied the movement was xenophobic.

About a week ago, immigrant spaza shop owners were chased from Rosedale in Upington after the killing of police constable Steff Visagie. Visagie was stabbed to death while asleep in Keimoes, 30km from Upington. He was a resident of Rosedale. Nigerian immigrant Emmanuel Chidiumi Okafor has appeared in court in connection with the murder. His next court appearance will be on 23 March.