“Why do people think that all Nigerians commit crime?” 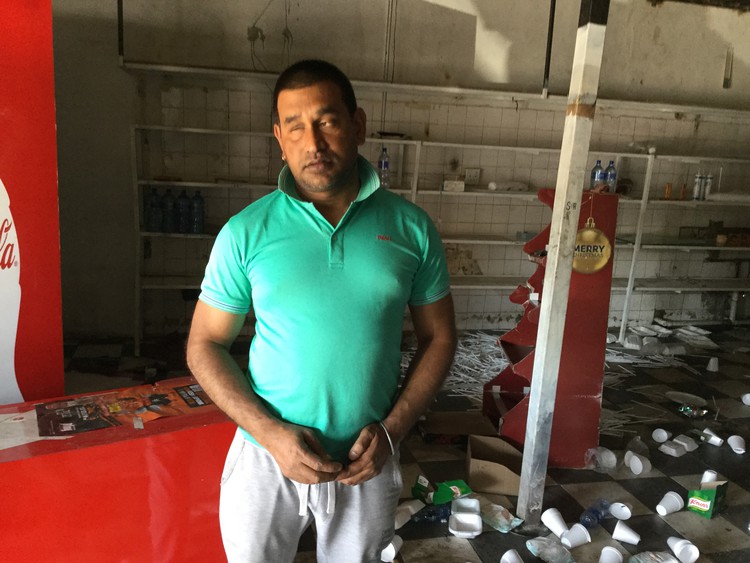 Herin Rashid says he doesn’t know if he’ll be able to open his shop again after looters stole his goods on Tuesday night. Photo: Kimberly Mutandiro

Owners of small shops in Pretoria were taking stock on Thursday of the damage after Tuesday’s night’s looting and burning in the city centre.

“It’s as if l am going crazy, l do not know what I’m going to do or where to start,” said Bangladeshi grocery shop owner, Herin Rashid.

His shop was broken into on Tuesday night. All his fridges were broken and all his stock was stolen. On Thursday he said he would clean up, but he was not sure he would be able to afford to restock the shop, which he has been running for three years.

He said his father had borrowed money for him to start the business and he was still paying the loan back. He was also looking after his parents and two siblings, sending them money every month.

“I do not understand why this was done, l’m a peaceful man. I’ve never wronged anyone,” he said. Rashid said he might not be able to afford to open a shop again.

“Me and my Bangladesh brothers used to help each other before. But now no one will help anyone, because all our shops were broken into,” he said.

His friend Ali Khan had been operating a cellphone counter in a shop opposite which was also burnt on Tuesday night. “I am married to a South African woman, when they hurt me they are also hurting her,” Khan said.

Nigerian Samuel Ike found on Wednesday that the clothing shop he had been operating for five years had been burnt down. Looters had taken all the clothing.

“Why do people think that all Nigerians commit crime? I’m just a simple man who was making an honest living. Now I’ve been stripped of my livelihood.”

“My family told me that l should come back home otherwise next time I may lose my life,” Ike said.

Ameji Nevo, another Nigerian immigrant, had been operating one big shop partitioned into a sewing section, salon and cell phone section. His shop was looted during the weekend. On Wednesday he came to clean up.

“Anyone can commit crime, even South Africans. There are South Africans who sell drugs but no one does anything to them,” he said.

Nevo said he and others had gone to the Nigerian embassy to seek help.

“We are waiting for our embassy to get back to us. They gave us an option to either take us back home or help us re-open our shops,” said Arinze Chikwu Kale, who had been operating the small cell phone corner inside Nevo’s shop. All his stock had been taken. He has a South African identity card which he acquired in 2004. But he says this made no difference because he was still mistreated.

“If only things could become better for foreign nationals in South Africa,” he said.