Cops accused of not being there to protect stores 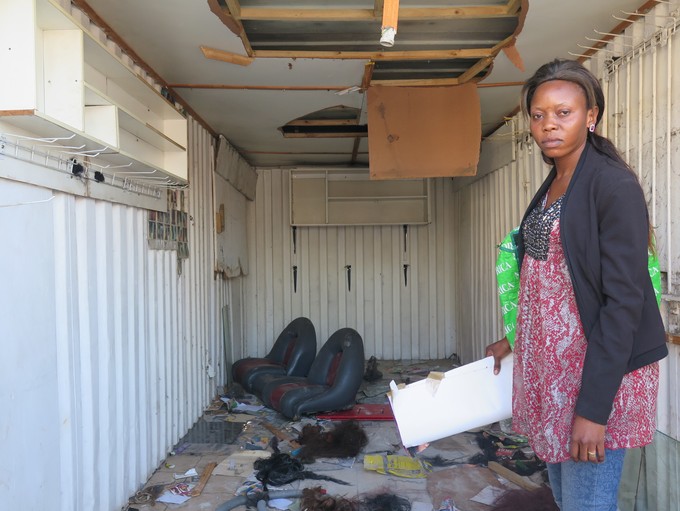 Longo Monzoto stands inside her looted shop. “My body is weak. I don’t know what is going to happen tomorrow,” she said. Photo: Ashleigh Furlong

By Naib Mian and Ashleigh Furlong

Violence flared up in Dunoon last night with immigrants’ shops being destroyed, leaving many shop owners with nothing more than a few scraps of paper and an empty container that used to house their shops. The violence follows recent housing protests in Dunoon.

This morning the streets of Dunoon were covered in shattered glass, the remnants of fires, cardboard and discarded goods from the looted shops. Some shop owners whose stores were not targeted could be seen loading their goods into cars as police stood guard, while those less fortunate stood by their empty shops.

Sucdi Omar, a Somali woman, sat outside the entrance to Dunoon. Her family-owned shop was looted last night, but they weren’t allowed in to reclaim any possessions or see the damage until this morning.

“We came at night, but police said, ‘We suggest you save your life, you go away. You can’t go inside,’” she said. “We couldn’t take our stuff.”

Her family came to South Africa and established their shop in Dunoon in 2005. “They [the protestors] want the government to see, these people are making noise,” she said. But a lot of the language is similar to the 2008 xenophobic attacks.

“They say, ‘you have money, you have a shop, we have nothing,’” Omar said.

“Yesterday I had a shop, but today I don’t. Today we are like them,” her sister, Aamina, added. “It’s all gone.”

At this point they don’t know what they will do next.

“There were no police here”

“We lost everything,” said Fumulemba, a Congolese women, explaining that her sewing machines, the clothes that she had sewed for her clients and the hair that she used in the hair salon had all been taken.

“This is the second time,” she said. In 2008 during the xenophobic attacks, Fumulemba lost most of the goods in her shop, but she managed to save one sewing machine. This enabled her to start her business again.

“They [the protesters] say they want houses, but if they want houses they must go to the government,” she said, adding that she previously had a good relationship with residents of Dunoon.

“[There were] no police here yesterday. They were protecting only Pick ‘n Pay, not us. That’s why they [the looters] take everything,” she said. (We are awaiting comment from SAPS on this allegation.)

“What must I do now? How am I going to survive?” asked Fumulemba.

When asked whether she will try to set up her shop again in Dunoon, Fumulemba says that she is not sure. “I have nothing,” she said.

“I don’t know what is going to happen tomorrow.”

Another Congolese woman, Longo Monzoto said that everything in her salon was taken last night.

“I don’t know [how] I’m going to survive. I am very, very weak. My body is weak. I don’t know what is going to happen tomorrow [or] after tomorrow.”

She said that she doesn’t know why the protesters would damage her shop but said that “they want houses” and that they “want a response from government”.

“I was in the police station this morning. They didn’t want to take my statement. They said I must come here and talk to the police,” she said.

A resident of Dunoon, Beaula Tom told GroundUp that it was “not ayoba [not good]” what had happened to the foreigners’ shops.

“I feel very bad [about] what happening to them,” she said. “At the end of the day these people are trying to [run] a small business.”

She said that when people wanted to loot the foreigners’ shops, you “can’t stop them.”

Despite this, Tom claimed that some foreigners sold drugs and that residents in Dunoon didn’t want their kids to use drugs. When it was pointed out that many of the shops were hair salons, Tom said that the drugs were hidden behind mirrors and pointed to the small empty packets by her feet which she said would have had drugs in them.

Constable Noloyiso Rwexana, spokesperson for SAPS Western Cape told GroundUp “a case of public violence was opened for investigation today”. She added that police are “on the scene monitoring the situation”.

She said, “12 suspects were arrested last night and are expected to appear in court once charged.”