“Arrest all of us,” say Westville residents after torching of alleged drug house 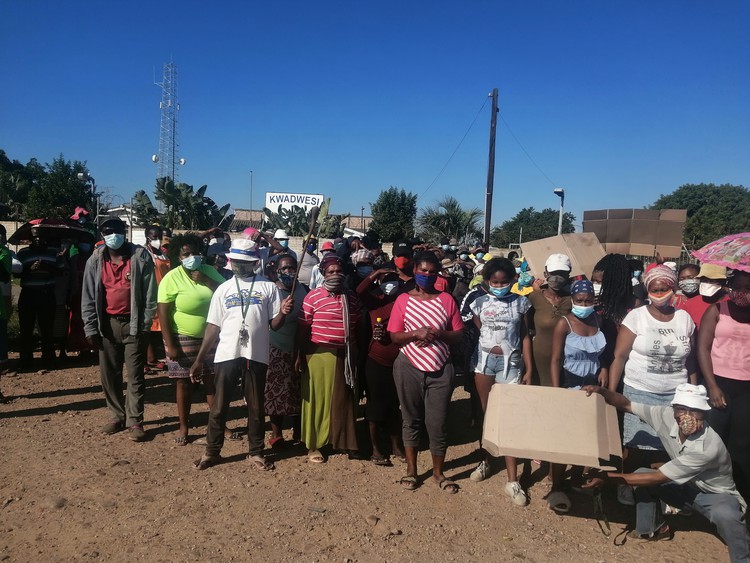 Residents of Westville informal settlement marched to the KwaDwesi police station on Sunday complaining that police are not taking action against a suspected drug dealer. Photo: Mkhuseli Sizani

About 100 people from Westville informal settlement in Port Elizabeth marched to the KwaDwesi police station on Sunday demanding that they all be arrested by the station commander.

They claim the police are not taking action against drug dealers.

The march followed an incident earlier on Sunday where police detectives are said to have visited the homes of community leaders, accusing them of torching a house of a woman whose son is believed to be a drug dealer.

“If it is a crime to fight the drug dealers in our community, the Station Commander must arrest all of us,” shouted a resident.

While the group was in contravention of lockdown rules by gathering, almost all the marchers were wearing masks. Some held up placards which read: Sonele ngamapolisa ase Dwesi which means ‘We’ve had enough of Dwesi police’.

The residents who spoke to GroundUp asked that we withhold their real names.

Solomzi Mhlaba* said, “Two detectives arrived at my house with the woman whose shack was demolished by residents on 24 April. We have been complaining about her and her son to the police for selling drugs in our community. Children aged 10 to 16 quit school because they are drug addicts. Robbery and house breaking have also escalated in our area because drug addicts rob people in order to buy drugs.”

Mhlaba said that the rule in the community was that if someone broke the law, they could be kicked out of the area. “The woman knew this. We have tipped the cops off several times about this house but we never got help,” she said.

He said a group of residents then decided to demolish the shack and warned the woman that she had until 25 April to remove her belongings. “Instead she asked us as the community leaders, in front of the police, whether our funeral policies were up to date. The following day we saw her materials burning,” he said.

Another community member told GroundUp that their lives were at risk. “I am no longer living at my house because I am being hunted. This woman and her son are very dangerous.”

Before leaving the police station about 1pm the group of residents vowed not to allow any police officer into their community. “We will deal with the criminals our own way because KwaDwesi police are working with criminals,” they said.

Provincial police spokesperson Colonel Sibongile Soci confirmed that a case of malicious damage to property had been opened on 30 April after a home was allegedly burnt by the community.

“Allegations were that the son of the complainant sells drugs and that they wanted this family out of their area.”

“One female was asked by detectives to come to the police station to shed more light on the matter. She arrived at the station with about 40 community members. The statement of the lady was taken and she was allowed to go back home,” said Soci.

“The community members who accompanied her were addressed by the detectives. The community was satisfied and all dispersed peacefully,” she said.

Soci did not answer other questions regarding specific allegations made by residents.