“I want all my rapists to be arrested”

Rape survivor says the police have failed her time and again 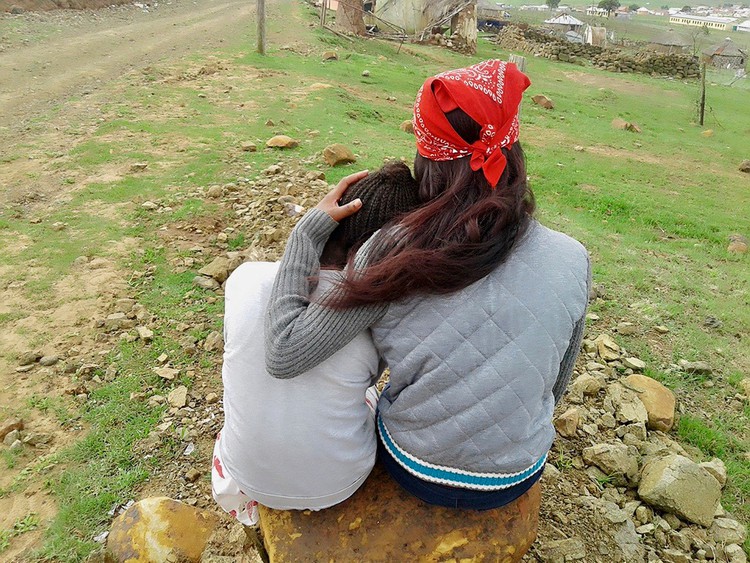 “I love my daughter and I hope that as time goes I will accept her because I can not change what happened and she deserves all the love she can get from me, ” says rape survivor who lives in rural Eastern Cape. Photo: Nombulelo Damba-Hendrik

Babalwa* says she has been raped many times. Despite laying charges and even getting to court, the cases against her assailants have never gone anywhere.

One case, which she opened in 2006, was struck off the court roll. She says the investigating officer never bothered to inform her of this. GroundUp tried to establish why the case was struck off the roll but could not find records to explain it.

In another case, opened in October 2017 against her uncle, whom she accuses of raping and impregnating her, the police at Nqamakhwe station claim they first need the results of a paternity test. A paternity test was done six months ago but they still do not have the results.

“I don’t think the police understand the pain I’m in … I will only get peace once I know that those rapists are behind bars,” Babalwa told GroundUp.

She said she had tried to move on with her life, but she struggles.

Babalwa is 28 and lives in Kwalambatha village in Tsomo, Eastern Cape. She says that when she was 15, she and her friends were chased by three men while visiting a village nearby. Her friends managed to escape, but Babalwa did not know the village roads. She ran towards a river and found herself trapped by its high embankments.

“They took turns,” she says. Two of the men raped her; the third man begged them to stop, but they ignored him and he left.

“I was hoping he would come back to save me, but he did not,” she says.

Her family advised her not to lay charges.

“The boys’ families came to my house asking for forgiveness. At the time, me, my mother and three siblings were depending on my aunt and her husband. They took us in because my mother was unemployed and my father left us,” she says.

Her uncle begged her to forgive the rapists. He even suggested she marry one of them and that they pay lobola (bride price). According to Babalwa they paid R1,000 and promised to bring more money.

“My family was ready to sell me, and my mother was told she had no say in the matter because it was not her house,” says Babalwa.

But Babalwa refused to accept the marriage attempt and she went to the police. “All I wanted was to see those rapists behind bars. They wanted to see me dead. There was no way I could forgive them.”

She says the suspects appeared in Tsomo Magistrate Court three times and the case kept on being postponed. “First time, the docket was not in court … I just do not remember the other times … The investigating officer promised to update me about the case.”

“Nothing was explained to me,” she says.

The police came to her home to collect her ID. The next day, when she returned from school, her ID was back at home. “Since then I’ve never heard anything from the police,” she says.

“Each time I go to the police I would be told that the investigating officer is not at work … I just got tired of going to the police station,” she says.

Tyali suggested that the reason “might have been that they are looking for her as she is a main witness. A case cannot proceed without the complainant in most cases.”

But Babalwa says she was at home for six years after laying charges, so that explanation would not make sense.

GroundUp asked Babalwa to contact the investigating officer whom she identified to GroundUp. He told her he did not remember the case, no longer deals with rape cases, and he would look for the docket.

“When I called him again he was so rude, saying that this is not the only case he deals with. I must wait for his call. I asked him to save my number, but he dropped the call,” says Babalwa. “I don’t know what to do anymore. Those men destroyed my life, and I’m sure they are living a happy life as if they have done nothing wrong.”

“All I can say is that my life was surrounded by rapists,” says Babalwa. “In 1998, when I was seven years old, my father raped me. I was with my friend playing at home. He raped us both then he ran away. He never came back. This is why we ended up at my aunt’s house.”

“I was starting high school when my uncle started raping me. At first, he asked me to pay him for raising us. I told him that when I finished schooling, I will find a job and pay him all his money. But he told me that was not the payment he wanted … I used to cry when he did it, but he didn’t care. I wanted to report him but I could not. I didn’t want to see my family on the street. My younger sister is disabled; she was not going to survive,” says Babalwa.

She says her uncle would rape her in the car before he dropped her off at school and then again after school before they reached home.

“I thought when I became pregnant [2009], he was going to stop. But that did not stop him. Even after I gave birth, he continued … My mother passed away while I was pregnant. I had to drop out of school to raise his [my uncle’s] child. I felt so helpless … That man would come back from work during the day to rape me because I was alone with the baby,” says Babalwa.

“In 2013, I decided to leave home, leaving my daughter, two sisters and brother behind. I could not continue with it anymore. I had to live on the streets. I was tired of being a sex slave,” she says.

Babalwa went to Butterworth, about 40 kilometres away. Later she moved in with a man. After a year, she told him what had happened to her. “He advised me to report the matter to the social workers. All I wanted was my child because she’s a girl. I didn’t want her to grow up next to him. I also wanted my sister to leave that house or at least be aware why I ran away from home.”

The Eastern Cape Department of Social Development in Butterworth contacted her uncle. “The social workers who assisted me were students doing practicals. My uncle did not deny raping me, but he told the social workers that they must first arrest my father and the two other men who raped me before they take him. Social workers assisted me in getting my child back,” she says.

Eastern Cape police spokesperson Jackson Manatha said that because the alleged rapes happened so long ago, police would need a paternity test to show that her child was indeed fathered by her uncle. The paternity test was done in August 2018, yet police could not give a date as to when the results would be known.

“I love my daughter and I hope that as time goes by I will accept her because I cannot change what happened and she deserves all the love she can get from me, ” says Babalwa.

*Not a real name. Her name was changed to protect her daughter.