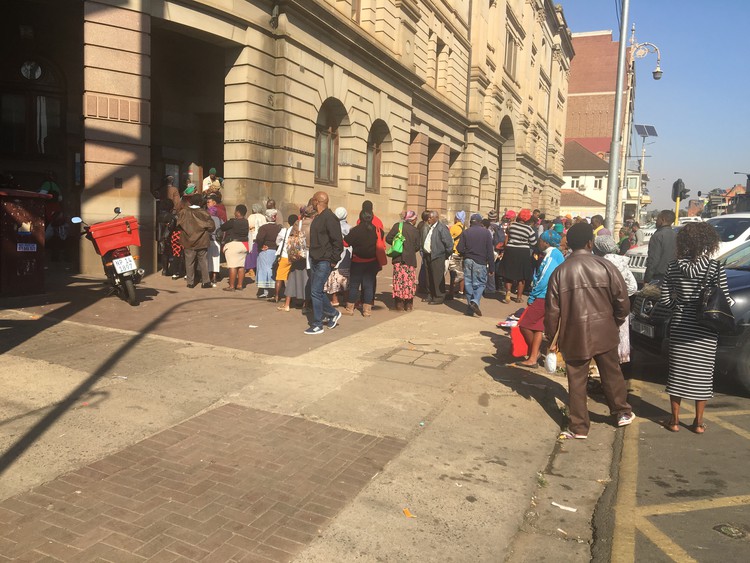 Glitches in the social grant payment system, now run by the Post Office, have resulted in many beneficiaries returning home empty-handed from pay points and ATMs.

The Post Office took over the social grant payment system in April (except for cash payments, which are still managed by Cash Paymaster Services). New cards have been issued for beneficiaries to receive money via the Post Office for the South African Social Security Agency (SASSA).

In Pietermaritzburg, beneficiaries came from Impendle, Elandskop, Edendale and other locations to collect their grants. Those with the new SASSA cards said they haven’t received money for three days. People we spoke to said they have made numerous attempts to use ATMs with no luck.

Andile Ntombela from Edendale was in the social grant queue at the post office on Langalibalele Street. This was her third attempt. Since Monday she has not been able to get inside the post office because of the long queues. She is a new SASSA card holder.

“On Monday I went to an ATM,” Ntombela said. “There was no money. I decided to come to the post office. The queue was very long but I waited. I could not get inside because of the queue. There are three queues inside. On Tuesday I took the first taxi from Edendale. I had again tried withdrawing money from an ATM. I used both the old and new cards. There was still no money. I went to the post office in Selgro Centre. The queue was very long. I went to Langalibalele. I find the queue longer than the one in Selgro Centre. I waited hoping I would get inside but I did not. It’s the third attempt now. I’m suffering from piles, I can’t stand for long because of the pain.”

Some recipients in the queue discussed how early they came to the post office to be first in the queue. Others were considering returning mid-month. Some older recipients sat on the side of the road.

“I’m tired and hungry,” said 62-year-old Nonhlanhla Dlamini. She is from Impendle. Dlamini was accompanied by her 17-year-old granddaughter. They came at 4am.

“It’s the second day we are here. Yesterday I could not get inside. I was demotivated on Monday when I did not get the money from an ATM. There is a post office in Impendle but their systems are always down. I came to this post office yesterday but I could not go in. By 4am we were here. It looks like some people slept here. I’m stressed. I don’t know if I will get my money today. My granddaughter will be standing in the queue for me inside. She will come and fetch me when it’s my turn. I have no food at home. My grandchildren have to eat. If I don’t get the money today, I don’t know what I’m going to do. I hope they fix this soon. I need this money,” said Dlamini.

SASSA spokesperson Vusi Mahaye said that SASSA is in discussions with the Post Office and other banking institutions to correct the glitches. He said a substantive number of beneficiaries have been affected.

“I cannot confirm exactly the number of people affected. We can confirm that holders of the new Sassa cards are 139,501 in KZN. In South Africa there are 886,250,” said Mahaye.

A SASSA statement offers this advice: “Should a beneficiary choose to access their funds through an ATM, the account type the beneficiary should select a savings account – in the event of the savings option being rejected, the beneficiary can then choose the cheque account option.”

The Post Office apologised for the glitches. Chief Operating Officer Lindiwe Kwele said the glitches did not affect all beneficiaries. She said 799,000 grants of the nearly 1.5 million beneficiaries using the new cards were affected.

Kwele said by Thursday 65% of these grants had been paid out. “During the July period a high number of transactions time out because of a very high volume of withdrawal requests. Transactions timed out after 30 seconds. This problem has been addressed by upgrading equipment. Transactions are now running smoothly.”

She further advised beneficiaries to visit any SASSA branch or card swap site to get their new gold SASSA card.