“I fell into a pit of mud and human waste” 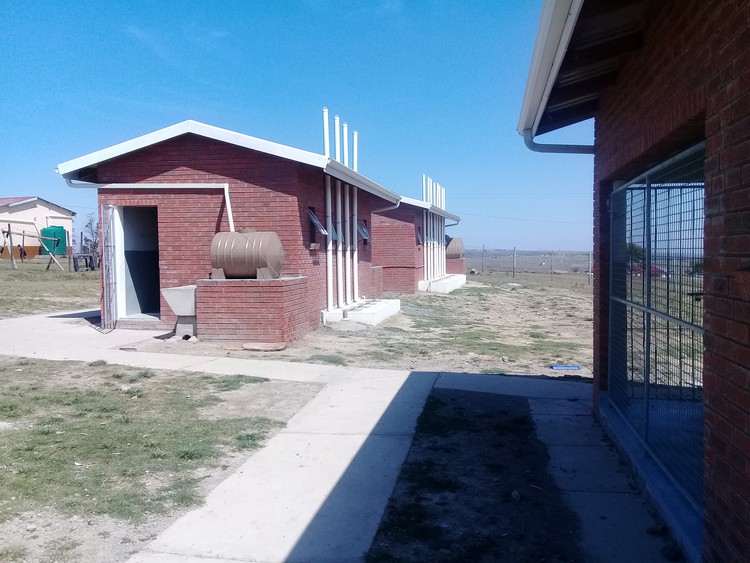 New pit toilets have been built at Kalalo Junior Secondary School after a caretaker nearly drowned in the old toilet. Photo: Chumani Mazwi

In August 2015, Mntundini Saphepha went to use the pit toilet at Kalalo Junior Secondary School in Elliotdale, Eastern Cape. The floor collapsed and he fell into a pool of mud and human waste.

Saphepha told his story in an affidavit to the Bhisho High Court during a hearing on Norms and Standards for school infrastructure in July this year. “I fell into a pool of mud and human waste up to my chest. It was so disgusting and there was even sanitary pads floating in the waste. I was drowning.”

It took Saphepha 25 minutes to free himself from the pit.

“I took off all my clothes and I poured water all over myself. I quickly called home and asked someone to bring me some clothes to change into.”

He called the school clerk who took a long pole to measure the depth of the pit. “It was about two metres deep.”

“I was scared to death when it was happening. I was in there for so long. I am so embarrassed by the whole thing.”

“I didn’t eat the whole day and half of the next day. I was so disgusted as I thought I might have digested some of the pool of mud and waste. I am now always anxious and nervous every time I have to use the bathroom.”

Saphepha said district officials had visited the school on 7 September 2015 and promised to build a new staff toilet.

New toilets were finally built in March 2017. The school now has four toilets: for boys, girls, people with disabilities, and staff.

When GroundUp visited the school this week, learners and staff said the new toilets were more hygienic and safer.

Grade 8 learner, Nosipho Mtsikini said, “The new toilets are clean and do not smell, we can also wash our hands in the sinks so that we will not get germs.”

School principal Matiti Sithembiso said, “These new toilets are safer than the previous toilets. There are slabs underneath to the toilet to support it from collapsing.

“We can rest assured that what happened to the caretaker in 2015 can never happen to anyone in this school again.”

But thousands of other South African schools still have unsafe pit toilets and though the judgment in the Bhisho High Court on 19 July compels the department to implement its Norms and Standards policy, the education department has decided to appeal the judgment.

In this week’s mini-budget, Finance Minister Tito Mboweni announced that in 2018/19 funding for sanitation projects in schools would be “reprioritised”. “Over the medium term,” he said, “government, donors and private sector companies will fund these projects and test new sanitation technology.”

He said R3.4 billion had been allocated to the education infrastructure grant for construction and maintenance of schools, including sanitation.

But Equal Education, which has been fighting for Norms and Standards, said the Minister’s speech did little to make the commitment to safer schools a reality.

“The irony of the Minister’s promise in the wake of the same government’s decision to appeal a court order compelling it to implement the Norms and Standards for School Infrastructure, also cannot be overstated.”