“I feed your families, but I can’t feed mine” 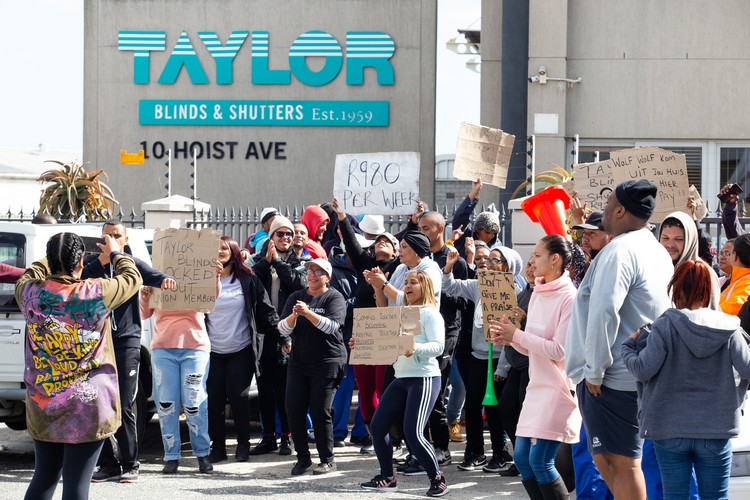 Since Monday, staff at Taylor Blinds and Shutters in Cape Town have been on strike for better wages. Photo: Ashraf Hendricks

About 100 workers have been on strike at Taylor Blinds & Shutters in Montague Gardens, Cape Town, since Monday. The strike for higher wages is led by the Independent Commercial Hospitality and Allied Workers Union (ICHAWU).

Taylor has been a member of the Trellidor Group since 2016. According to its website, the company has 180 staff countrywide.

The workers are demanding an increase of R250 a week. The company has offered 6%, according to the union. The minimum paid workers at Taylor earn R980 before deductions per week or R23.50 per hour. (The legal minimum wage is R23.19 per hour.) So for these workers, 6% is much less than R250.

Workers held placards that read: “I feed your families, but I can’t feed mine” and “20 years, no job title”.

ICHAWU General Secretary Dale Fish said that the union had reached a deadlock. The company gave notice of a lockout soon after the notice of strike action was given on 2 April.

Manager Bernard Wolfaardt wrote in a letter to the union, “We confirm the principle of no work no pay.”

Fish said that the union told the company to lift the lockout, pay its members from Monday until now, and let the workers go back to work. If they did not get an adequate response then they would take the matter to the Labour Court to decide whether the lockout was lawful or not, said Fish.

“The pay they’re giving us is not fair. There are people getting R980 per week before deductions. How can you live with that?” said Stephens.

Shafwaan Martin, shop steward and a machine operator, said in October he would have been working for the company for 15 years, but he earns R1,600 per week before deductions.

He said another employee, who has been working at the company for 25 years, is paid R1,900 per week before deductions.