I cry every month for my money, says pensioner 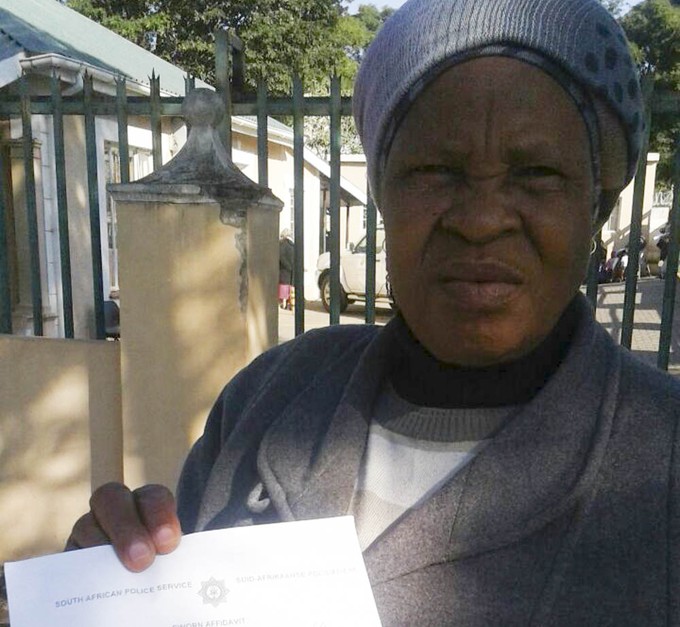 Yalezwa Mtshizana with the affidavit she filed at Butterworth police station about deductions from her social grant. Photo: Nombulelo Damba-Hendrik

Yalezwa Mtshizana of Msobomvu in Butterworth loses R300 every month from her old age grant, in repayments on a loan she says she never took out.

SASSA has put in place a complaints system, but beneficiaries say it is not working.

Another pensioner in Butterworth, aged 63, told GroundUp that when she asked for assistance at her SASSA office, “All they tell us is to call the 0800 number written at the back of the card, and on that number you wait for hours before they respond – if they respond.”

She said she had lost hope that SASSA would ever solve the problem.

GroundUp accompanied Mtshizana to the Butterworth SASSA offices, where an official told her to call the toll-free number (0800 6001 60) on the back of the SASSA card.

Mtshizana explained that she had called the number several times without getting through and that when she finally did get through she had been put on hold for almost 30 minutes until she lost all her airtime and never received help.

Another official in the Butterworth SASSA office said people came to the offices every day complaining about deductions from their grants. Some people ended up with no money left on their social grant, said the official, who did not want to give his name.

“You won’t believe what we deal with here, especially the first two weeks of the month. People come here crying and there’s nothing we can do to help them. We used to call the number for them, but we stopped because the complaints are increasing every day,” he said.

Mtshizana said that when she asked SASSA officials about the deductions they told her they can’t assist her.

“I cry every month for my money,” she said.

When GroundUp called the toll-free number we were put on hold for almost an hour before the phone hung up.

The second time we got through after 30 minutes.

The agent asked for Mtshizana’s ID number and her full name.

When she supplied the information, he told her that she had taken out a loan of R1,000 from Moneyline. Mtshizana said she knew nothing about a loan and asked for the documents she would have signed had she applied for the loan. She was told that she had applied for the loan using a cellphone, but when we called the cellphone number she was given, MTN said the number did not exist. Mtshizana went to the Butterworth police station to file an affidavit stating she had never authorised the loan.

Moneyline is a subsidiary of NET1, the company that pays the social grants on behalf of SASSA through Cash Paymaster Services. Moneyline has been accused of targeting social grant recipients to offer them loans.

Anyone can apply for a loan from Moneyline by dialling *130*3737*1#. The system prompts the caller to punch in his or her SASSA number.

Social grant recipients also complain of deductions for airtime and electricity which they have not authorised and do not want.

Last week, SASSA laid a criminal charge against the directors of Cash Paymaster Services and of Grindrod Bank, which provides the accounts into which the SASSA grants are paid.

SASSA was supported by the Black Sash, which has been running a “Hands off our Grants” campaign, and the Association of Community Advice Office in South Africa (ACAOSA).

The case was opened at the Sunnyside police station in Pretoria.

SASSA charged that the two companies were not implementing amended regulations under the Social Assistance Act of 2004. SASSA said the regulations compelled the companies to stop deducting money from social grant beneficiary accounts for financial services.

“The only money that the law allows to be deducted is for a funeral policy and the condition is that it mustn’t be more than 10% of the value of the grant involved. The other conditions are that it must not be a child grant and permission must be sought by the beneficiary from SASSA if it is a funeral cover for any other grant except a child grant,” SASSA said in a statement.

This follows a settlement last month in the Constitutional Court between the Minister of Social Development, SASSA, and Lion of Africa Assurance which ensures that no new direct deductions for funeral insurance from children’s grants will be allowed.

Net1 said SASSA’s decision to file charges followed a Net1 announcement on 3 June that the company had asked the High Court for an order providing certainty on the regulations which limit deductions from social grants. SASSA had indicated it would oppose Net1’s High Court application. The hearing had been scheduled for 28 June, said Net1 in a statement.

“It is not clear why SASSA has not yet filed similar criminal charges against the 1,300 other financial institutions (including most of the major South African banks) who submitted debit orders against the bank accounts held by SASSA beneficiaries during the June payment cycle, or if it intends to do so in order to be consistent in its approach.”

Brenton van Vreden from the Department of Social Development said for the past two to three years the department had been fighting illegal deductions from social grants. The department had even approached the South African Reserve Bank and the Constitutional Court, but the deductions had not stopped, prompting the decision to open a criminal case against the Grindrod Bank and the CPS.

“This is the money that should be used to buy food and basic needs for the family. Instead it is used for electricity, airtime and loans which are not needed,” said the Black Sash’s Lynette Maart.

Albert Makwela, President of ACAOSA, said many cases of unauthorised deductions had been reported to its advice offices.

“We want to make sure that the law takes its course,” said Makwela.