Consumers stock up on booze as alcohol sales reopen

By Thamsanqa Mbovane and Bernard Chiguvare 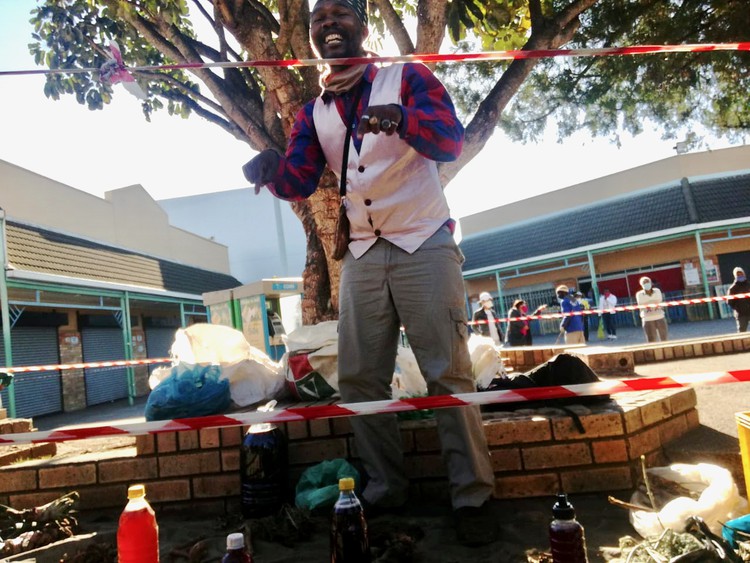 On Monday morning a rastafarian, who identified himself as Malwande Gwele, criticised the government for re-opening taverns and liquor stores while he hasn’t recieved a permit to sell herbs. Photo: Thamsanqa Mbovane

“I am going to buy wine that may last me a month,” said Hetta Schempers, 66. “I missed wine for all these days. This was horrible.”

She was among the first 30 customers to queue for liquor at Tops bottle store in Louis Trichardt, Limpopo, on the first day that has permitted the sale of alcohol since the Covid-19 lockdown 67 days ago.

Susan Masikwa, Tops Liquor manager, went around instructing customers to observe social distancing. There were markings 1.5 metres apart outside and inside the store.

“There was always a fight for the television remote between myself and my kids. Kids favour watching cartoons but I loved watching other programs. Now, from today it is over. I will leave the kids while I enjoy my liquor outside,” said Justice Ramarope.

By 7am on Monday morning long queues had formed at Big Daddy and Shoprite Liquor stores in KwaNobuhle, Uitenhage, Eastern Cape.

“Over the weekend, people were lining the streets when tavern owners went to buy alcohol at big outlets using trucks and vans. They cheered at these vehicles loaded with alcohol … I have never seen something like this before,” said resident Thobeka Peyi.

A rastafarian, who identified himself as Malwande Gwele, and who sells umhlonyane (a herb) in the Uitenhage city centre, was supported by shoppers while three security guards wanted to remove him.

Standing where red tape had been strung to prohibit street vendors from selling merchandise, he said, “Other traders are selling steel wool, socks, and why am I not allowed to trade?

“When I applied for a permit from the municipality they gave me a permit to sell sweets.”

“Stage 3 has seen the whole mall opened for trading, yet I can’t be allowed to trade whilst I sell healing herbs, rather than killing booze.”