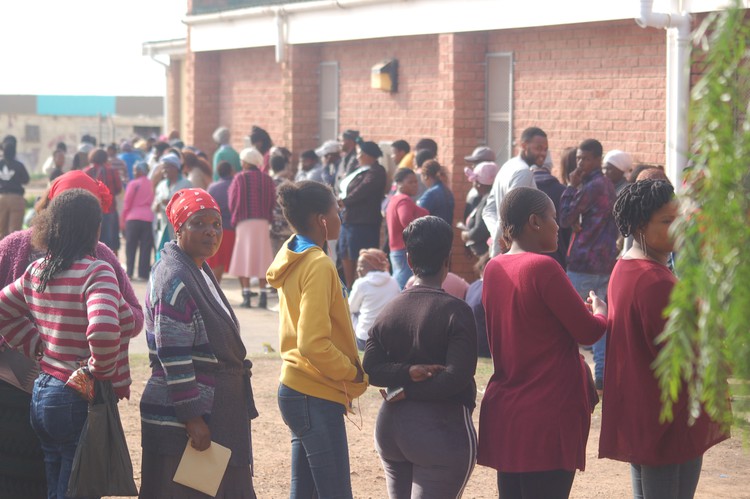 People from all six wards in KwaNobuhle, Uitenhage queued to register on housing lists from 4am on Monday. Some complained that computers froze and they were sent back home. Photo: Thamsanqa Mbovane.

Queues stretched around the block in KwaNobuhle, Uitenhage, as hundreds of residents queued to register or check their registration on the new consolidated housing waiting lists.

The list consolidated previous lists from all levels of government. “An audit was done with all the existing housing waiting lists - local, provincial and national,” said Mniki. “Now we’ve got one housing waiting list … where all information is being verified.”

He called on people to verify themselves on the new list “so that we know everyone who is in the housing waiting list”.

A glitch in the computer system at the Babs Madlakane Hall left some residents angry.

“I hope that this is the outcome of our votes, and that they’re seriously going to embark on service delivery, ” said Lawukazi Stuurman, 76, from ward 47.

She said she had come to check that her two grandsons were registered. “One of them works at the taxi rank as a kondi (money collector) and the other one is jobless.”

“We have all been staying under one roof for over two decades,” Stuurman said.

She said she had come on Wednesday last week and again on Friday. “They closed before I entered in both days, saying it was time to go home. The queue is long every day … longer than the queue for voting.”

Registration continues until 31 May.

Mniki said people should not expect houses to be found for them immediately after the end of the registration period. “There is no new housing development,” he said. “Housing delivery continues as it has been.” Child-headed households, the elderly and disabled people were prioritised in house allocation, he said.