“The money doesn’t reach the schools. We are tired of the department’s corruption” 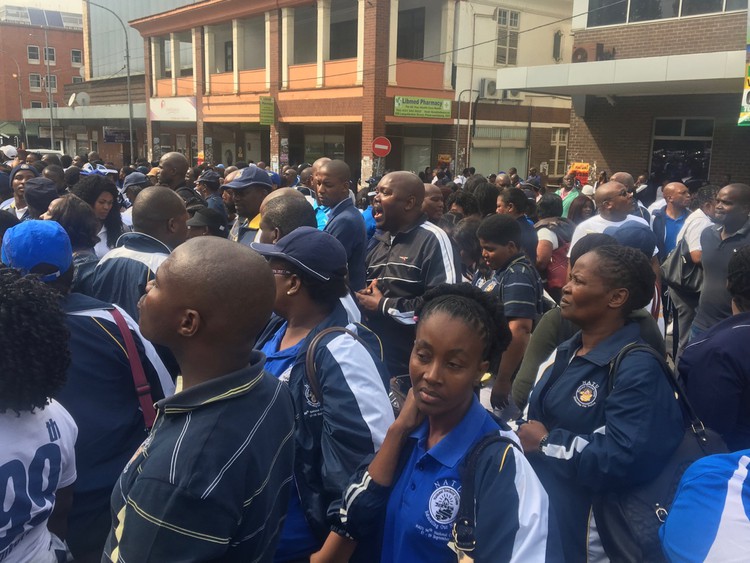 Hundreds of Grade R teachers, who are members of SADTU and NATU, protested outside the KZN legislature, demanding an increase they say they were promised in 2016. Photo: Nompendulo Ngubane

Hundreds of Grade R teachers from across KwaZulu-Natal protested outside the legislature in Pietermaritzburg on Thursday. They demanded that MEC for Education Mthandeni Dlungwane speak to them. They wanted to know when they will get the increase, which they say they were promised in 2016. Teachers said they cannot survive on a salary of R6,500 per month.

Dlungwane was meant to table his 2018/19 budget at 3pm in the legislature. His speech started an hour later.

“We are not going anywhere,” said a teacher from Mvoti. “As we are here, some grade R learners have no teachers. We want our money. I was not paid in April. Instead of paying us, he [Dlungwane] committed himself to a sanitary towel project. Millions are being spent on that project. We have been waiting since 2016. Nothing is happening. How can the department say it doesn’t have money? They are spending millions on sanitary pads.”

The teacher said the pads were piling up in the schools. “Some teachers have made a business. They sell them. They no longer serve the purpose,” she said.

Members of NATU started to protest at about 10am. They were later joined by SADTU members. Rain did not stop the protesters from singing and chanting. At times, both unions’ members sang together.

A teacher from Manguza said: “We can’t be waiting forever. What can we do with R6,500? … I’m the breadwinner at home … That money doesn’t cover my living expenses. I end up taking money from loan sharks. Their interest is high. I end up with nothing. Our children don’t go to private schools like their [government] kids. We demand this increment.”

Spokesperson for the Department of Education Kwazi Mthethwa said the teachers will be paid. He did not say when. “The MEC has told the KZN legislature that he will increase the stipend of grade R teachers. Those who are qualified will receive an increase of R1,250. Teachers who are not qualified will get an increase of R750,” said Mthethwa.

Vice President for NATU Nkululeko Ngcobo said money is not the only issue. “Some school don’t have textbooks. The department is announcing the budget. We don’t know where that money goes. They say big amounts of money but schools are suffering … The money doesn’t reach our schools.”

Ngcobo said, “The schools that suffer the most are the ones in rural areas. Some of the teachers have not been paid this month. Why is that? We are tired of the department’s corruption.”